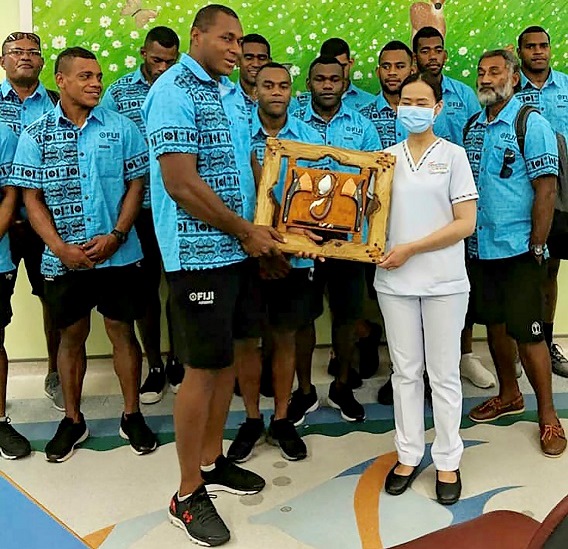 The Fiji Airways Fiji 7s team presenting a gift to one of the staff members at the KK Womens and Childrens Hospital in Singapore during their Fiji Airways organised visit. Picture: SUPPLIED/FIJI RUGBY

He is counting the cost of surviving the torrid battles and setting the historic win from Happy Valley in Hong Kong last weekend.

As he sets out to successfully defend the Singapore 7s title this weekend, first he has to overcome fatigue creeping into his side.

“This week is a tough one,” Baber said from Singapore last night.

“The processes have to be right to get ourselves into position to win this tournament.

“It’s about being confident about what you have as a plan and sticking to that and not getting blinded by distractions around you or fatigue or anything else that can show up as a sign of weakness in your preparation.”

But the Welshman, a former international, has the remedy to again make Fijians happy this weekend.

“We know what we have got to do. We have been here before. It is about getting your team prepared in the best manner sticking to your plans, and sticking to what has worked for you previously.

“That is very much the plan from the staff and the players for this week. We have talked about it.”

Baber said it would not be easy for all teams heading into Singapore.

He said it’s now a race between all teams to see who could get their side in the best possible mental and physical state before the beginning of the tournament.

“It is extremely tough and obviously. We train the boys to operate at this level. Every team is in the same boat, bar a few that did not play that sixth game.”

Fiji again find themselves in a strong pool with series champions South Africa, Canada which won the Singapore 7s title in 2017 and Scotland which has always been known to be unpredictable.

Baber said there were no major injury in the squad which was always positive going from one tournament to another.

The team will begin its proper training sessions today.