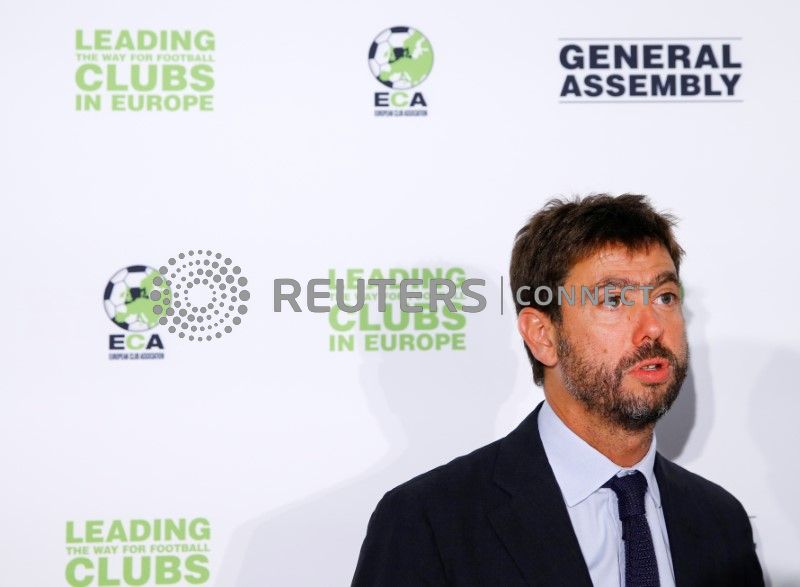 ZURICH (Reuters) – More than 200 European clubs have been invited to an assembly in June to discuss the future of UEFA competition including the idea of a “pyramidal Pan European League System.”

The European Club Association (ECA) will also ask its 232 members, who include all of Europe’s top clubs, whether they feel that more European football is good for the game.

The current European calendar runs until 2024 and the ECA, which is working with UEFA to devise new-look competitions, has said it wants more clubs playing more continental games.

However, the proposals have run into opposition from the English, French and Spanish leagues, as well as the European Leagues umbrella organisation, who argue that domestic football is more popular with the public.

In a letter seen by Reuters, ECA chairman Andrea Agnelli invited clubs to the meeting in Malta to share their views on “some principles we feel are fundamental to the future of European football and around which we will seek to work with UEFA to evolve the club competitions.”

These included “a pyramidal Pan European League System with continuity and opportunity to grow from within” and “enhancement of mobility and dynamism across the system through carefully applied promotion and relegation.”

Agnelli’s letter did not say whether this would be a separate pyramid from domestic football, or how teams could qualify for the new league.

It did, however, say that European competition should remain as “an inclusive platform for all clubs, based on sporting meritocracy, not historical privilege” and should strive to retain “access and relevance” with domestic leagues.

The ECA, which has previously denied reports that it plans to create a closed league with captive places for the biggest clubs, said discussions were still at an early stage.

“Disappointingly, a great deal of incorrect speculation and rumour has appeared in the media and from some other stakeholders over the past few weeks,” said Agnelli, who is the president of Serie A champions Juventus.

Agnelli also suggested that ECA members should not accept an invitation to a European Leagues meeting in Madrid next month.

“I can only assume that, at this meeting, further allegations and misconceptions will be put forth in the interests of preserving the status quo,” he said.

In his own letter to European Leagues members and clubs, seen by Reuters, Olsson said that national associations and leagues represented clubs to an “even greater extent” than the ECA but they had recently been overlooked.

“Over the last 10 years, all decision making concerning the development of European club football has been a private business between ECA and UEFA, without any other stakeholder included,” said Olsson.

He said that not even national federations were informed about changes which took affect in the Champions League in 2018 and that “we are now suffering the consequences.”

Olsson said the European Leagues would prepare its own proposal for the future of continental competition and “you (leagues and clubs) will be able to judge for yourselves which model will be the best.”

“Our proposal will be based on the discussions we will have with our member clubs, National Associations, all our fans and other stakeholders,” he said.