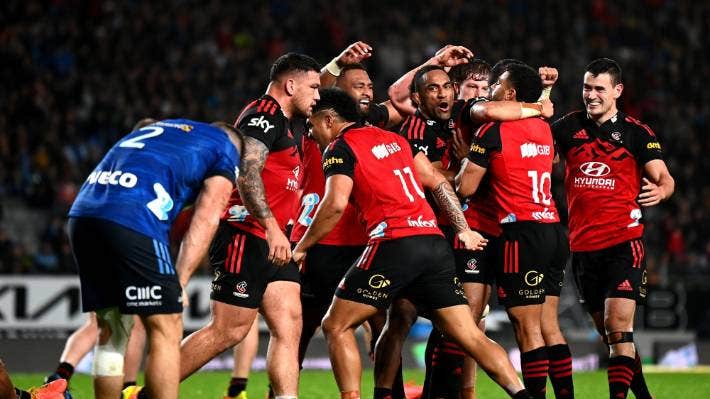 HANNAH PETERS/GETTY IMAGES The Crusaders celebrate a try to Bryn Hall just before halftime in the Super Rugby Pacific final at Eden Park.

Cool, clinical, classical. The Crusaders have delivered another grand final masterpiece to strangle the life out of the home-town Blues in front of a sellout crowd of 45,000 in Saturday’s Super Rugby Pacific decider.

The big crowd packed the Auckland rugby citadel hopeful of cheering their side to a 16th consecutive victory in this outstanding season; instead they could only stand and applaud another magnificent final performance from Scott Robertson’s side as they secured a remarkable 13th Super Rugby title (including two of the Aotearoa variety).

The commanding victory, two tries to one, continued the Red and Blacks’ incredible dominance under Robertson. Since the man they call “Razor” took charge in 2017, they have rattled off a hat-trick of Super Rugby titles, back-to-back Aotearoa triumphs and now have lifted the inaugural Pacific trophy. They are quite simply indomitable, and it is no coincidence Robertson is considered the All Blacks coach in waiting.

The masters of knockout rugby, of owning the big moments, of squeezing the life out of opponents on the big stage did it again, pressuring the Blues into a remarkable 10 losses on their own throw at lineout time. With that sort of profligacy, the in-form home side were really no chance.

The Crusaders forwards dominated the battle for possession and territory, and negated the dangerous home backline superbly throughout. Sam Whitelock, the rugged Pablo Matera and the busy Tom Christie led an outstanding pack effort, Richie Mo’unga had some real moments of brilliance, and Leicester Fainga’anuku, Sevu Reece and David Havili were the pick of a backline that ran hard all night. Will Jordan, of course, gobbled up 118 metres with ball in hand.

The Blues were up against it all night with that imploding lineout, and just could not create the chances they needed to change the momentum. Beauden Barrett could make no headway, and Rieko Ioane was a non-factor.

It was all the Crusaders through the first 40 minutes as the Blues lineout wobbled badly (losing five on their own throw) and they simply did not have enough possession or territory to put the visitors under much in the way of pressure.

In many ways the hosts were fortunate not to head into the sheds with more than a 13-0 deficit, and it was only some heroic rearguard defence that kept the Crusaders from mounting a more formidable advantage through a half in which they had 64% territory and 63% possession, double the running metres (301-151) and forced the Blues to make 115 tackles, to just 46 of their own.

It was only in the shadow of halftime that the Crusaders managed to cross the Blues’ line, with Bryn Hall’s little dab-down, after a brilliant run on the inside line by Fainga’anuku, adding to the dropped goal and penalty accumulated earlier by Mo’unga.

It looked a long way back when Mo’unga banged over an early second-half penalty for the 13-0 lead, and though Fin Christie ignited the big home crowd with an opportunist try just shy of the three-quarter mark (the Crusaders making a rare set-piece error at a defensive scrum), the deal was sealed when Reece ran through to gather Matera’s pinpoint kick through in the 76th minute.

All that remained was for the Crusaders to raise yet another trophy, and that Razor breakdance to unfurl.

Bryn Hall’s try right on halftime. The Red and Blacks had been absolutely rampant through the first 40, but had only a 6-0 lead to show for it. The halfback’s little dab-down from a metre out made it a much more comfortable 13-0.

Rain that fell for most of the day made conditions slippery on top, and the occasion added to the tightness. But this was a masterclass performance in pressure rugby from the Crusaders, and that elevated a competitive encounter into a quality one.

It’s on to test rugby now for a big group from this match, with 11 from the Blues and 10 of the Crusaders heading into camp with Ian Foster’s All Blacks. The test-like intensity of this final should stand them in good stead.

The old dog Sam Whitelock wins this for leading a lineout obliteration that laid a mighty foundation for victory. He was right at the heart of a dominant forward performance that the Blues simply had no answer to.