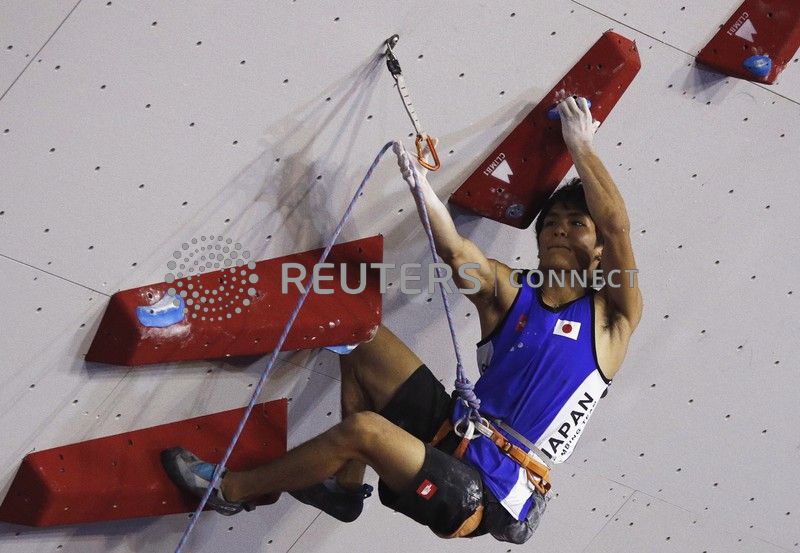 TOKYO (Reuters) – Tomoa Narasaki and Akiyo Noguchi have boosted Japan’s hopes of a medal when sport climbing makes its Olympic debut next year after winning gold and silver at the Climbing World Championships in Tokyo.

Narasaki won the men’s combined event on Wednesday, a day after Noguchi won silver in the women’s competition, as both climbers secured qualification berths for 2020.

The combined event will feature at Tokyo, with each athletes’ ranking across the three disciplines of speed, bouldering and lead merged to give a cumulative score.

Narasaki took the victory over reigning champion Jakob Schubert of Austria with top-two finishes in all three disciplines.

“I only have winning the gold medal in my mind, hopefully being the first in all three events,” Kyodo News quoted Narasaki as saying.

Narasaki, 23, leads a strong group of Japanese male climbers who finished in four of the top six spots on Wednesday.

Noguchi, another bouldering specialist, had to battle back from a disappointing seventh place in the speed discipline to claim the silver behind Slovenian Janja Garnbret.

“If I had failed to qualify for the Olympics, I was going to retire. Now I have another year of the competitive climbing I love ahead of me,” said the 30-year-old.

Garnbret, who also won the combined 2018 World Championships and the past three overall World Cups, looks set to be the heavy favourite at Tokyo but Japan will fancy their chances of a medal.

As well as Noguchi, three other Japanese women reached the combined final, including current world number three Miho Nonaka, though there is only one more spot available for 2020.

The Japanese Olympic Committee have said they are targeting 30 gold medals on home soil. Their previous best at a Games was 16, achieved at Athens 2004 and when Tokyo last played host in 1964.