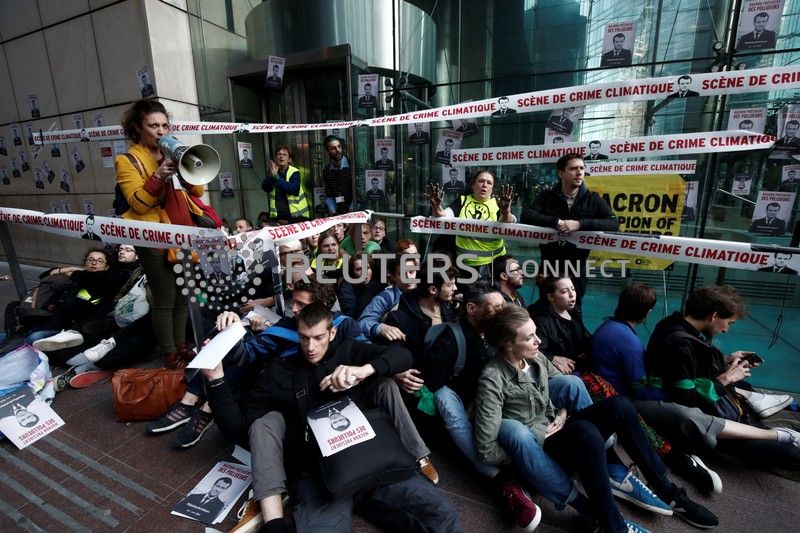 Greenpeace said it was protesting against company links to the oil and gas industry, which it calls a driving force in global warming. Activists also obstructed the entrance to the environment ministry near La Defense business district.

Police pepper-sprayed one group blocking the bank’s main entrance in a sit-down protest.

Some demonstrators taped themselves together while others cuffed themselves with plastic ties to metal poles to make it harder for police to dislodge them.

Employees in business suits milled around outside their offices. “I just want to get inside and on with my work,” one frustrated bank employee said.

Greenpeace and action group Les Amis de la Terre (Friends of the Earth) have previously criticised Societe Generale for its role in financing oil and gas projects, in particular the Rio Grande LNG gas project in the United States.

A spokesman for EDF, which relies heavily on nuclear and hydropower plants to generate electricity, said 96 percent of its power was carbon dioxide-free. He said EDF was committed to curbing its total carbon footprint by 40 percent by 2030.

“Many people are demonstrating in Paris and are asking for more action. We all know it is not so easy because the population’s primary request is for access to more energy, affordable energy and it has to be clean,” he said.

He added that Total was trying to address climate change by improving the efficiency of its operations, growing its natural gas business and developing an electricity business based on low-carbon gas and renewables.

He also said Total had increased its output to 2.95 million barrels of oil equivalent per day this year, passing its 2018 record, aided by increased production in Australia, Angola, Nigeria and Russia.

Friday’s protest echoed a series by the Extinction Rebellion group of climate-change campaigners in London this week that have caused transport snarl-ups in the British capital.