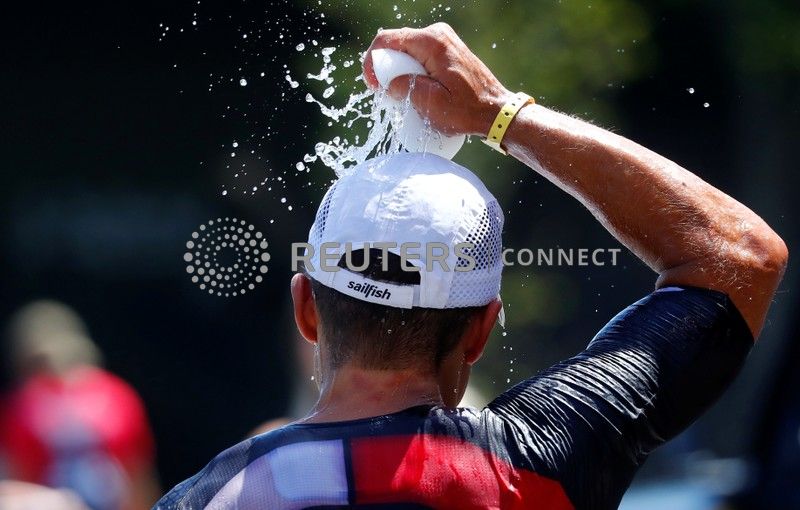 FILE PHOTO: An athlete tries to cool down as he competes in the Ironman triathlon European Championships in Frankfurt, Germany, June 30, 2019. REUTERS/Kai Pfaffenbach

“Climate change is no longer an abstract increase in global mean temperature, but a difference you can feel when you step outside in a heatwave,” said Geert Jan van Oldenborgh, Senior Researcher at the Royal Netherlands Meteorological Institute and one of the paper’s authors.

“The observations show … similarly frequent heat waves would have likely been about 4C cooler a century ago,” said the report by the World Weather Attribution group of scientists.

It also said that climate change had made the record-breaking heatwave at least five times more likely.

“We experienced a heatwave whose intensity could become the norm in the middle of the century,” said Robert Vautard, senior scientist at France’s CNRS institute.

Climate scientists have long said that a warming of the earth’s surface caused mainly by industrial-era emissions of carbon-dioxide from fossil fuels will make weather events more extreme, and make those extremes – such as storms, drought and flooding – more frequent.

The World Weather Attribution group used computer models over three days from June 26-28 to calculate the temperatures they would otherwise have expected.

Meteorologists say a weakening of the high-level jet stream over Europe is increasingly causing weather systems to stall and leading summer temperatures to soar.

The World Meteorological Organization said on Friday that 2019 was on track to be among the world’s hottest years, and that 2015-2019 would then be the hottest five-year period on record.

It said the European heatwave was “absolutely consistent” with extremes linked to the impact of greenhouse gas emissions.