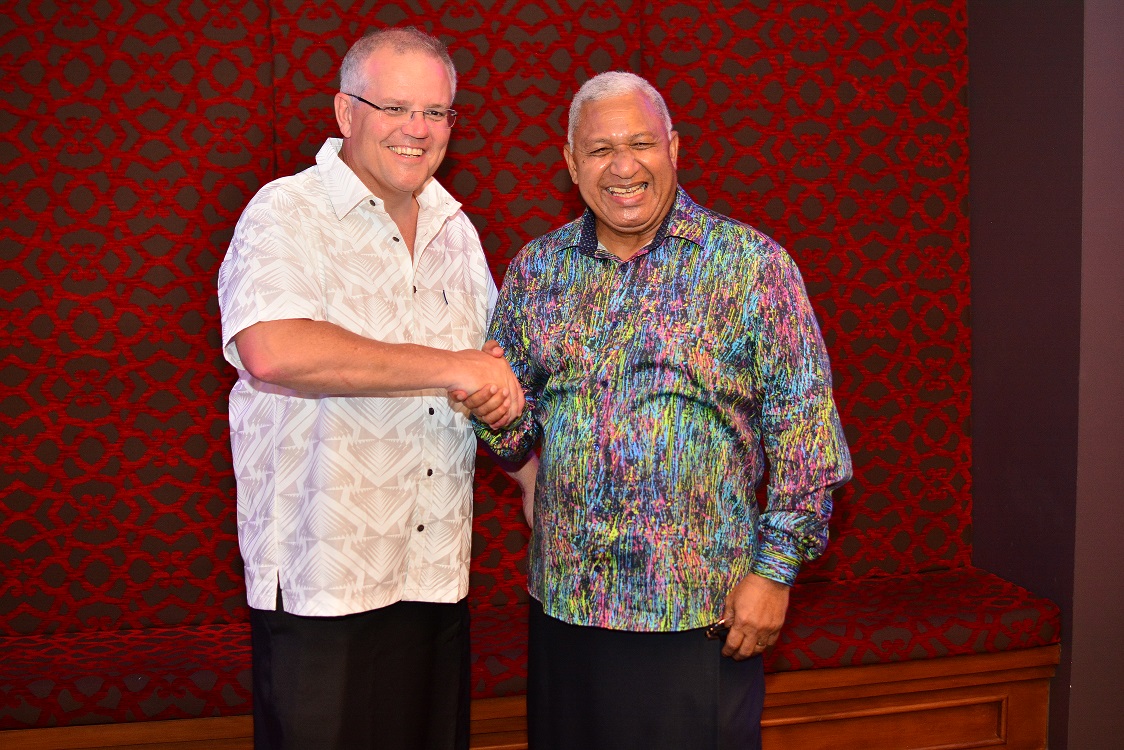 In a speech during his counterpart Scott Morrison’s Pacific visit, PM Bainimarama called on Australia to put the welfare of Pacific peoples before the interests of any single industry.

“Here in Fiji, climate change is no laughing matter,” he said.

“From where we are sitting, we cannot imagine how the interests of any single industry can be placed above the welfare of Pacific peoples — vulnerable people in the world over.”

It is the first time a political leader has publicly confronted Morrison on the question of climate change during his Pacific tour.

In 2015, then-immigration minister Peter Dutton quipped about the fate of the Pacific Islands in the face of climate change, prompting laughter from then-prime minister Tony Abbott.

“Time doesn’t mean anything when you’re about to be … you know, have water lapping at your door,” Dutton said.

Morrison, then the social services minister, pointed out to both men that a microphone was above them.

In his speech on Thursday, Bainimarama said Fiji and Australia should be “good neighbours” and highlighted the searing temperatures dominating Australian cities this week.

“Prime Minister, I urged your predecessor repeatedly to honour his commitment to clean energy future, the only future that guarantees the survival of your neighbours in the Pacific,” he said.

Morrison’s predecessor, Malcolm Turnbull, abandoned the emissions reduction target in a bid to stave off a leadership challenge last year.

A vocal proponent of climate change policy who led the UN’s Climate Change Conference in 2017, Bainimarama said the issue “cannot be written off as a difference of opinion”.

“Consensus from the scientific community is clear, and existential threat posed to Pacific Island countries, a certainty.”

Australia will not neglect the region: PM

But Bainimarama also lavished praise on Morrison for his so-called “Pacific step-up”, and said he had “transformed” the Australia-Fiji relationship by visiting Suva.

“While it was a short flight to Suva, your presence has already taken our relationship a very long way indeed,” he said.

Morrison’s engagement with the Pacific set a “new precedent” and was “absolutely a step in the right direction”, he added.

“When our nation and our people have been left devastated in the aftermath of ever-worsening cyclones, Australia has always proven to be a friend we can count on,” Bainimarama said.

No Australian prime minister has come to Fiji since 2006, and Morrison’s trip is aimed at shoring up Australia’s influence in the nation, which has been courting Chinese investment.

Fiji and Australia yesterday agreed to a host of new initiatives and committed to a “Vuvale Partnership” (or “family partnership”) in a sign of warming ties.

Both countries have agreed to more regular ministerial meetings, while Australia has promised to send Border Force officials to Fiji to offer local guards training.

Australia has also pledged $84 million for a new partnership with Fiji’s University of the South Pacific, and $17 million to provide 1,000 hours of Australian television content each year to Pacific broadcasters.

Morrison declared that Australia would make sure it did not neglect the region.

“One of the risks of close relationships is sometimes they can be taken for granted, and there are periods in our past where that has been the case,” he said.

“Not now. And not in the future if there’s anything my government has to do with it.”

Some Australian diplomats were anxious that the stoush over Islamic State extremist Neil Prakash would overshadow the visit.

Fijian officials were angered when Australia stripped Prakash of his citizenship, arguing he was instead entitled to Fijian citizenship through his father.

But Fiji insists Prakash and his family were never registered as citizens, and have made it clear Prakash would not be welcome.

When questioned, Morrison said Bainimarama had not raised the issue at all in Thursday’s talks — indicating the two men had smoothed over the issue before sitting down in Suva.