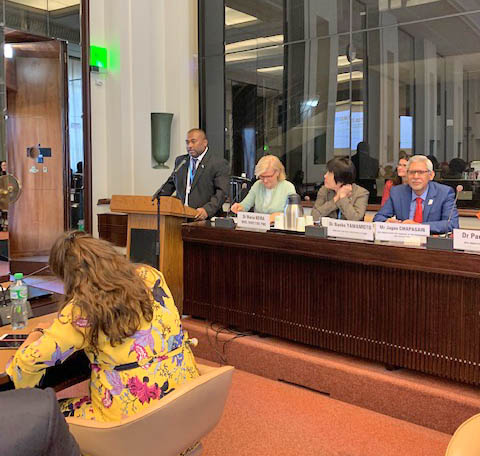 “CLIMATE change is the biggest battle of our time and the battle that we must win.”

These were the remarks by Fiji’s Minister for Health and Medical Services Dr Ifereimi Waqainabete as he appealed to the audience of the reality of Small Islands Developing States at its side-event at the World Health Assembly in Geneva themed ‘Air pollution, climate change, oceans, and health’.

“Climate change and air pollution kills, we need a healthy ocean to sustain humanity, we cannot reemphasise the nexus and inter-connections of all these three key issues,” Dr Waqainabete said.

He related his personal story on the eve of the wrath of TC Winston as a consultant surgeon where he was tasked to lead a health team to Vanua Balavu.

“The houses were torn apart and hospital staff had only the clothes on their back.

“The staff were told to stay behind to assist the injured leaving their families in dire need, became the beacon of hope for others. Never again will I see that happen, never again!

“Global climate emergency is a battle of our lives.

Dr Waqainabete called for genuine and shared commitment across the Pacific to implement the Action Plan on Climate Change and Health approved by the WHO in the Assembly.

He also updated the forum of Fiji’s commitment in August this year, where Fiji will host the Fifth Asia Pacific Parliamentarians Meeting on Global Health.

This meeting will bring parliamentarians from 30 countries across Asia and the Pacific to Fiji, where they will discuss further on the nexus between climate change and health.