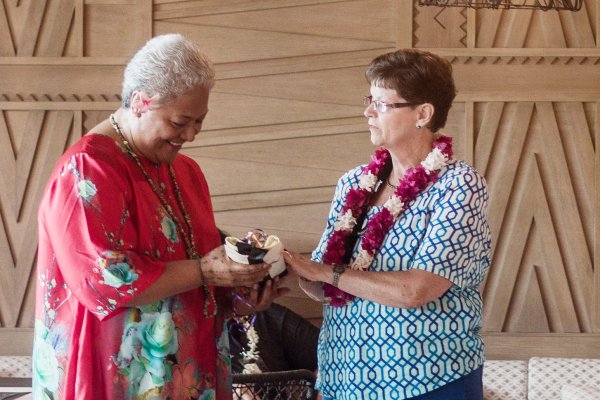 APIA, 12 OCTOBER 2018 (SAMOA OBSERVER) – Developing sustainable tourism in the face of climate change was one reason women with background in tourism and conservation linked up recently.

In a low-key networking event co-hosted by Women in Climate Change network (WICC) of Samoa and the Women in Tourism International Alliance, women and some men had the opportunity to share their issues and discuss potential partnerships.

The Deputy Prime Minister Fiame Naomi Mata’afa gave the opening remarks, where she said it was pleasing to see powerful women united to merge their spheres of influence.

“As these spheres come closer, they cover a greater area, and we can have a great impact,” she said.

Fiame said private sector and non-governmental relationships like the ones encouraged at the networking event can have great impact.”

“The main point is the coverage these women will have on influencing our society through those partnerships,” she added.

The Deputy PM said discussing tourism and climate change in the same space is essential, when looking at ways to protect Samoa’s pristine environment.

“A lot of people are denying climate change, but we are seeing the evidence right before our eyes.”

Keeping carbon emissions low and ensuring the earth does not warm about 1.5 degrees this century is the main focus, she added.

Women in Tourism International Alliance (WITIA) is in Samoa on an educational trip to introduce their interested members to the tourism marketplace of Samoa.

“We are so pleased we chose Samoa for this educational visit, and we have encountered such pride in your culture from everyone we have met,” she said.

Vice president Leah Gage said the trip is about site visits and forming relationships with tourism retailers around the country, in order to boost the profile of Samoa with tourism agencies around the world.

The women on the trip hail from Australia, America, New Zealand, Norway and China.

Gage said the group also tries to get behind the tourism veil, by visiting primary schools to donate sports equipment and stationary.

Later this week they will meet the Women In Business Development Inc. to form contacts and explore the products the women involved sell as well as donate $600 tala (US$255) they raised through fundraising in Australia.

“We are trying to see as much as we can in a short space of time,” she added.

Sose Annandale from Sinalei Reef Resort and Spa is a member of WITIA and so the group of 35 are staying at Sinalei for three nights to support her business, added Ms Gage.

Samoan women in the tourism sector, who wish to join WITIA, can do so this week and be exempted from paying AUD$30 (US$21) joining fee, said Gage as she wants the local tourism sector to benefit from the international network.