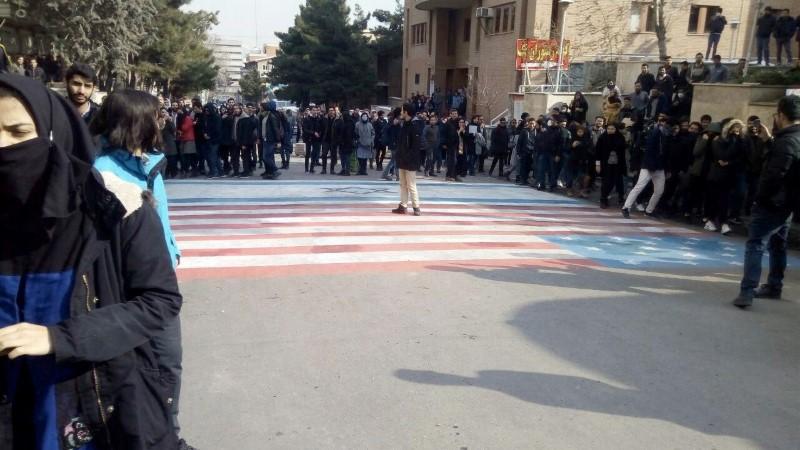 FILE PHOTO: Students walk around, instead of across, U.S. and Israeli flags at the Shahid Beheshti University in Tehran, Iran January 12, 2020, in this image obtained from social media. Courtesy of @MAMLEKATE/Social Media via REUTERS.

DUBAI (Reuters) – Protesters took to the streets of Iran to denounce the country’s clerical rulers and riot police deployed to face them in a third day of demonstrations on Monday after authorities acknowledged shooting down a passenger plane by mistake.

Iran’s president called last week’s downing of the Ukrainian plane a “disastrous mistake” on Saturday, and said its air defenses responded in error while on alert after Iran carried out missile strikes on U.S. targets in Iraq.

Iranian public anger, rumbling for days after Tehran had repeatedly denied it was to blame for the plane crash, erupted when the military admitted its role.

A full picture of protests inside Iran is difficult to obtain because of restrictions on independent media. But videos uploaded to the internet showed scores, possibly hundreds, of protesters on Monday at sites in the capital and Isfahan, a major city to the south.

Video showed students chanting slogans including “Clerics get lost!” outside universities in Isfahan and in Tehran, with riot police taking positions on the streets.

Images from the previous two days of protests showed wounded people being carried and pools of blood on the ground. Gunshots could be heard, although the police have denied opening fire.

The demonstrations are the latest development in one of the most serious increases in tension between Washington and Tehran since Iran’s 1979 Islamic Revolution.

U.S. President Donald Trump, who raised the stakes by ordering a drone strike that killed of General Qassem Soleimani, Iran’s most powerful military commander, in Baghdad on Jan. 3, tweeted to Iran’s leaders: “Don’t kill your protesters.”

Five nations whose citizens died in the crash, which killed all 176 people aboard the Ukraine International Airlines flight, will meet in London on Thursday to discuss possible legal action, Ukraine’s foreign minister told Reuters.

The five include Canada, which had at least 57 passport holders on the flight, many of them Iranian-Canadian students and academics heading home after holiday visits.

Canadian Prime Minister Justin Trudeau said on Monday that the victims would still be alive and at home with their families now if there had been no tensions in the region, according to a transcript of an interview with Global News TV.

Trudeau said Canada did not receive a heads up before the United States killed Soleimani, and that he “obviously” would have preferred one.

“The U.S. makes its determinations. We attempt to work as an international community on big issues. But sometimes countries take actions without informing their allies,” he said.

Canada’s Transportation Safety Board said that Iran had signaled the agency could play an active role in the investigation and invited it to analyze the plane’s black boxes of cockpit voice and data recorders. Two Canadian investigators were traveling to Tehran.

The TSB’s director of investigations, Natacha Van Themsche, said one of the main questions was why Iran did not shut down the airspace around Tehran after it attacked Iraqi bases housing U.S. troops in retaliation for Soleimani’s killing.

Another question was why Iran initially denied responsibility for the crash, after a top Iranian commander said he had told the authorities on the day that the plane had been shot down.

The International Civil Aviation Organization, the U.N. aviation agency, said on Monday it had accepted an invitation from Iran to provide expert advice in the probe.

The protests come at a precarious time for the authorities in Iran and the proxy forces they support to wield influence across the Middle East. Sanctions imposed by Trump have hammered the Iranian economy.

Videos posted late on Sunday recorded the gunfire around protests in Tehran’s Azadi Square. Men who seemed to be security personnel ran as they gripped rifles. Riot police hit protesters with batons as people shouted “Don’t beat them!”

Reuters could not immediately verify the footage. State-affiliated media has reported the protests in Tehran and other cities but without all the details from the uploaded videos.

“At protests, police absolutely did not shoot because the capital’s police officers have been given orders to show restraint,” Tehran police chief Hossein Rahimi said in a statement on state media.

Accusations of lethal force against the protesters should be fully investigated, a spokesman for United Nations Secretary-General Antonio Guterres said on Monday.

Iran’s authorities killed hundreds of protesters in November in what appears to have been the bloodiest crackdown on anti-government unrest since 1979. In Iraq and Lebanon, governments backed by pro-Iran armed groups have also faced mass protests.

The deaths of the plane passengers, including many Iranians, adds trauma to a nation still raw from the November deaths.

Trump precipitated growing tensions with Iran in May 2018 by pulling out of a deal under which sanctions were eased in return for Iran curbing its nuclear program. Trump says he wants a more stringent pact, while Iran says it will not negotiate as long as U.S. sanctions are in place.

After the militia surrounded the U.S. embassy in Baghdad for two days, Trump ordered the strike on Soleimani, whose killing led to days of mourning and shows of solidarity with the authorities.