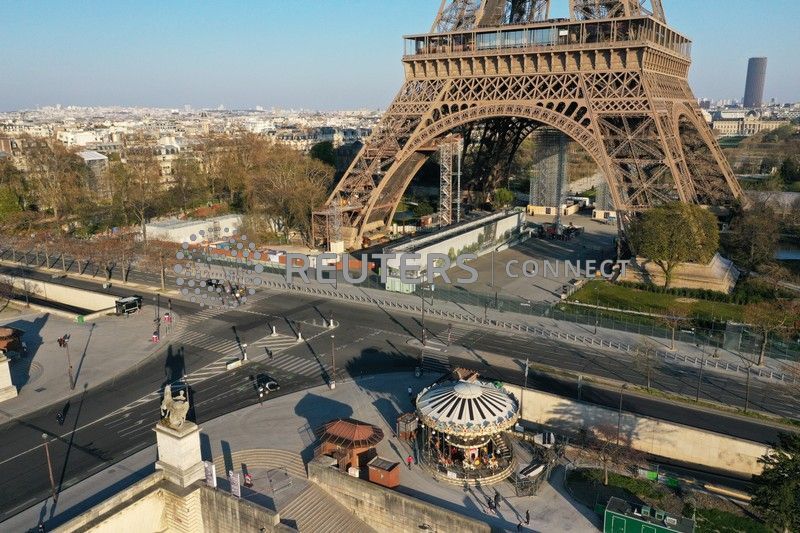 FILE PHOTO: An aerial view shows the deserted Eiffel tower in Paris during a lockdown imposed to slow the spread of the coronavirus disease (COVID-19) in France, April 1, 2020. Picture taken with a drone April 1, 2020. REUTERS/Pascal Rossignol/File Photo

And so the pensioner from Lyon switched her vote in last Sunday’s municipal election, among the first worldwide to be held after countries began emerging from lockdown, in favour of the Green party.

The results, which saw the Greens take control of or become an alliance partner in no fewer than 11 city halls, may point to a broader shift in voting patterns as governments, companies, and citizens adjust to the COVID-19 era.

“I realised how clean the air was, how nice it was to walk in a city, and be awoken by birdsong rather than car horns,” Arnaud, 64, said. “I told myself there was good in this crisis and that we had to rethink our city in a different way.”

Certainly, support for the party officially known as European Ecology – The Greens (EELV) was already growing.

With no lawmakers in France’s parliament and only four staff in its Paris headquarters, the Green party performed more better than expected in last year’s European Parliament elections, polling third with 13.5% of the vote.

Over the past couple of years, they have made strides elsewhere in Europe too.

In Germany, the Greens are the second most popular political party though have sunk into the background during the pandemic, while they are junior partners in Ireland’s new coalition government, as well as in Austria.

But the pandemic is forcing a rethink of how we live our lives: from the future of global supply chains to how we work in offices, from how we plan our cities to the food we eat,

“That played a part,” Julien Bayou, leader of the Greens in France, told Reuters of his party’s success in the elections.

He did so on a campaign platform to create a 450 kilometre-long network of cycle highways, widen pavements for pedestrians, source 50% of school food locally and build more social housing.

From Bordeaux in the southwest to Strasbourg in the east, Sunday’s green wave engulfed cities large and small across France. In Paris, too, they joined forces with the socialist incumbent re-elected on a promise to cut pollution.

In Lyon, Doucet’s campaign chief Ninon Guinel said the coronavirus crisis had exposed the fragility of Western economies and the need to unwind the excesses of globalisation.

“People realised the system was at breaking point,” she said.