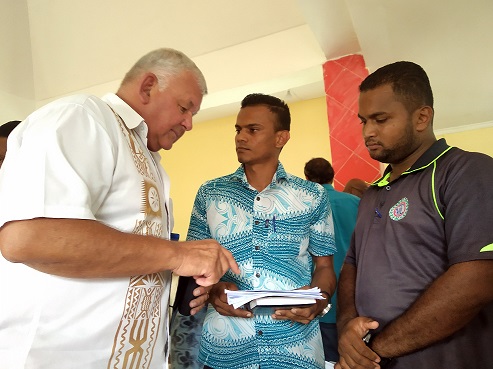 In rounding up their national consultations in Labasa, Mr Clark said the meeting provided stakeholders an opportunity to put together a policy that would strengthen the industry.

“This consultation is a historic event and we now have a chance to develop a policy with stakeholders of Fiji and strengthen the industry and its future,” he said.

“The policy will look at ways of strengthening the industry from the fields, money from the sugar sales and into your bank accounts. “Each piece of chain is to be covered in the policy and will determine better ways of going forward.”

Mr Clark said many issues had been discussed, including the target of three million tonnes of cane.

“Issues have included why we are using idle land for sugarcane farming and it is because we can grow back some areas with cane and improve the yield,” he said.

“And we know our cane yield in Fiji has declined and we have fantastic cane in Fiji, so what do we do to increase the yield?

“This will be done though training, extension services provided by FSC and other areas that we will look at.”

The upgrading of machines in the three mills, Mr Clark said, had also been considered.

“We know that we have three mills in the country that are very old and while FSC has started improving efficiency in mills, we still have work to do,” he said.

“Lautoka mill was our focus area in the last season with targeted work and as a result, stoppages in Lautoka came right down.

“The Lautoka mill ran very well and helped us a lot after cyclones and floods in the Ba region so we brought cane from Rarawai.

“This mill has been a big challenge as it has old equipment that started to fail plus the cyclones, so we are spending $10m to fix plants and make it more efficient.” Mr Clark said $8m would be used on the Labasa mill.