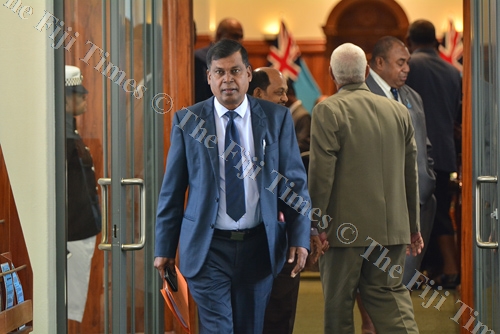 The National Federation Party has called on Local Government Minister Premila Kumar to stop meddling with the day-to-day governance of municipal councils in the country.

Party leader Prof Biman Prasad claimed there was growing disquiet among many ratepayers, citizens and management of councils who had claimed of direct ministerial interference into the day-to-day operations and appointments of management of various councils.

Prof Prasad said the minister should allow the municipal councils to perform their duties in accordance with the Local Government Act.

“We have seen the ministry advertising positions of chief executive officers of councils when that is the role of the council,” he claimed.

“We have also been told that the ministry even has a say on who is appointed as managers of various council departments.

“We ask the minister to come clean and inform the people of Fiji why she or her ministry is involved in these processes and what law permits them to do so if they are doing it.”

Prof Prasad claimed that in the absence of any legislation, such action was seen as meddling into the governance of councils and influencing appointments.

“That would give rise to the perception of nepotism, and currently this perception is growing amidst allegations that Open Merit Recruitment System (OMRS) is not being followed especially in respect of appointment of CEOs of councils.

“We hear claims that a recently appointed CEO of a council in the Western Division was picked up in a council vehicle, brought to be interviewed for the position, and then dropped back in the council vehicle.”

He also asked the minister to clarify claims of newly-appointed CEOs enjoying nearly double the salary of their predecessors and whether a council’s salary scale allowed for such a hike.

“We believe perceptions of nepotism and interference are growing because the ministry’s micro-management of municipal councils.

“We have been told for a long time that management of councils are not allowed to make any decisions without the approval of special administrators or the ministry in respect of human resource and workers’ welfare.

“This is clearly the result of the current FijiFirst Government’s desire to directly control the affairs of councils for over a decade and deny the ratepayers and citizens their democratic right to elect their own representatives.”

A request for comments on claims made by Prof Prasad was sent to Mrs Kumar via email yesterday.

No response was received when this edition went to press last night.

Last month, this newspaper received numerous concerns and tips from some ratepayers and concerned citizens relating to the appointments of CEOs of municipal councils, selection criteria, their salaries and consultations with ratepayers.

Questions pertaining to the concerns were sent to the ministry’s permanent secretary, Dimity Fifer, on April 2, 2020.

Ms Fifer responded on the same day saying the ministry needed time to respond to the questions.

“Thank you for your email. We can certainly respond to your queries — there are a large number of questions and it is important we have adequate time to respond with appropriate detail,” she said.

On May 4, this newspaper sent a follow-up email reminding Ms Fifer of the questions that had been sent to her.

On the same day, she responded: “We have a draft which will be sent as soon as it is cleared.”

The ministry had not responded by yesterday.