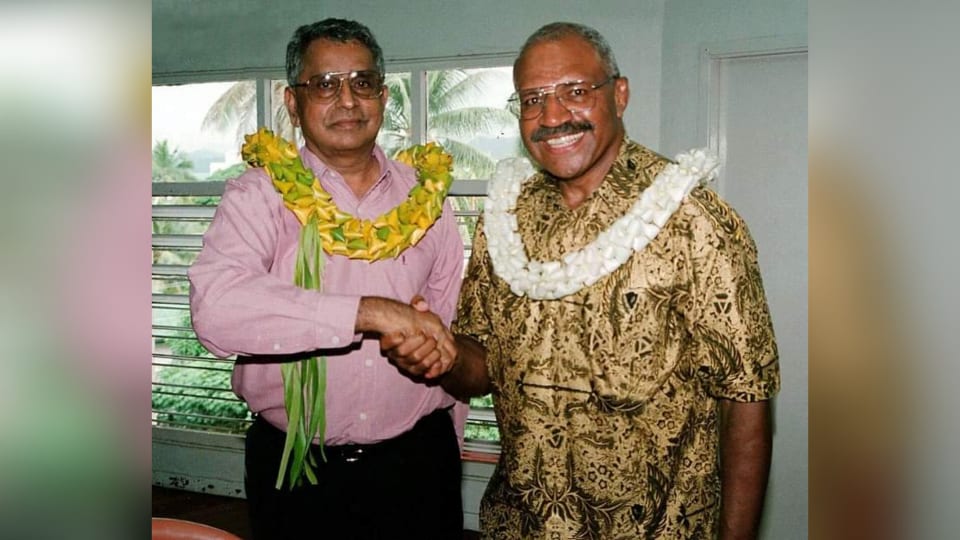 The last article in this series highlighted the emergence of conflict and discord in an otherwise concerted move towards reviewing the 1990 constitution.

The three commissioners – Sir Paul Reeves, Tomasi Vakatora and Professor Brij Lal – had worked remarkably well together in presenting a consensus document to President Ratu Sir Kamisese Mara on September 6, 1996. An analysis of the 1997 constitution is clearly beyond the scope of this series.

What I can share, however, are changes that were made to the report submitted by the Constitution Review Commission (CRC).

It is little understood that this report had to be reviewed by the Joint Parliamentary Select Committee (JPSC), which was stacked with hawks holding entrenched and diametrically opposed positions.

One is hard-pressed not to raise the question whether it was mere coincidence that many of the rejectionists owed money to the ill-fated National Bank of Fiji.

One of the key changes made to the initial CRC report was in the composition of the new Parliament.

The commission recommended a 70-seat House of Representatives, comprising 45 seats elected on common roll constituencies and 25 from temporarily reserved (communal) seats based on the actual population proportion of the different ethnic groups and on past historical factors.

The breakdown was thus as follows: 12 Fijians and Pacific Islanders, 10 Indo-Fijians, two general voters and one for Rotumans.

The aim was to encourage co-operation across the ethnic divide. Zerosum thinking was being hounded out of Fiji politics.

The JPSC acknowledged the advisability of the logic underpinning the commission’s recommendations, but reverted in the end to sticking with the timetested formula of predominantly communal representation.

They demanded that of the 71 seats, 46 would be contested from racially reserved constituencies and the remaining 25 from open, non-racial constituencies.

It was in order to move decision-making towards cross-ethnic accommodation and co-operation that the nowquestioned preferential voting or alternative vote (AV) system was proposed.

The AV system theoretically provides incentive for vote pooling by requiring the winning candidate to obtain more than 50 per cent of the votes.

It envisages that like-minded political parties would trade preferences and ensure congruence in the types of policies that they would champion.

The expectation was that Jai Ram Reddy and Sitiveni Rabuka would have an additional reason to work together in ensuring that their vision came to fruition.

Unfortunately, Mahendra Chaudhry pounced on the opportunity this presented and traded preferences with political parties that had no reason to cooperate with the Fiji Labour Party other than to win the 1999 election. The whole purpose of the AV system was thus defeated.

Rabuka’s stewardship It was highlighted in the last article that key characters vehemently opposed much of the CRC report.

The SVT submission was suspected to have been heavily influenced by Dr Ahmed Ali who was apparently hugely impressed by Malaysia’s treatment of its Bumiputra (indigenous people).

Despite misgivings from many who had high hopes for positive change via the 1997 constitution, the immediate barrage of negativity that it faced led to tremendous despondency all around.

This is when Rabuka took charge and quietly assured key people that the review process would come to its logical conclusion. His firm belief, charisma, communication skills and canny leadership came to the fore as he declared in Parliament that there was “no provision in the Draft Convention (on the Rights of Indigenous Peoples) nor is there any intention that there should be provision, that would confer on members of any indigenous community anywhere in the world, inherent rights of paramountcy or predominance over other citizens”.

“For that itself would be a breach of the natural birthright of every individual in any country, to equality before God and the laws of his or her country, as well as the Charter of the United Nations itself,” he said.

The die was thus cast; the 1997 constitution would come into being. Now it was time for the JPSC to come up with a consensus report. Rabuka sat as chair amid strident opposition from many of his senior colleagues who wanted him to lead the Fijian/SVT submissions.

He refused saying that as PM, he had to take an inclusive approach. The 25-member JPSC, walked a tightrope amid a brittle environment. Rabuka reminded the committee that “we can neither coerce conformity nor impose uniformity”.

There was need for compromise and concessions all around.

In the words of Professor Brij Lal, “Rabuka would confound everyone by his deftness and dexterity as the review process unfolded”.

There was vehement opposition throughout the deliberations as extremists and ethnonationalists opposed the process at every opportunity.

After a tedious and fractious process, the Constitution (Amendment) Bill, 1997 was introduced in Parliament on June 23, 1997 by PM Sitiveni Rabuka and seconded by Jai Ram Reddy.

Rabuka made the preferred position very clear by saying “we cannot make any real progress in promoting national unity in Fiji unless and until we have representatives of all communities sitting together in Cabinet and sitting alongside each other on both sides of this Chamber”.

It goes without saying that there were deep reservations about the direction that the constitution review process had taken.

One after another, senior members of the Taukei Movement and SVT raised questions about too much change as opposed to incremental change.

Many lamented that the aims of the 1987 coup had been subverted. Much is made of the fact that ultimately there was consensus in both Parliament as well as the Bose Levu Vakaturaga in accepting the 1997 constitution.

The fault lines however, were loud in their silence. A heavy political price would be exacted in 1999.

Centrally involved in it were Poseci Bune and Adi Koila Nailatikau. Others in the party, like Manasa Lasaro and Ratu Epeli Ganilau, were once very close to Rabuka.

It was obvious that even though the constitutional review process was supported by key people, many of its initiatives and provisions were silently distrusted and rejected. Fijian firebrand Isimeli Bose, was prophetic when he stated, “while they (Fijians) have been silent, it is an ominous silence underlying the truth in the culture of silence.

Their silence does not mean they have accepted the changes. If an election were held tomorrow, many of us would find it difficult to retain our seats”.

This is indeed what happened. The new preferential voting system propelled the Fiji Labour Party to a landslide victory where it secured 31 Indian and six Fijian seats in the 71- member Parliament.

Chaudhry became the first Indo-Fijian PM of Fiji as Rabuka and Reddy receded to contemplate a huge opportunity missed.

There would be recriminations and lessons learned. Chaudhry would embark on a popular ride that turned sour after a short while.

His problem was that he was not familiar with Fijian protocols and practices.

We can only think back and wish he had been given more time, but that was not to be.

It was time for another coup as our mahogany forests matured and familiar rumblings began to emerge. We will take a closer look at the 1999 elections in the next part of this series.

• DR SUBHASH APPANNA has been writing occasionally on issues of historical and national significance. This series was triggered by a recent reference to Fijians of Indian Descent as vulagi by an aspiring politician. The views expressed in this article are his alone and not those of The Fiji Times or his employer.