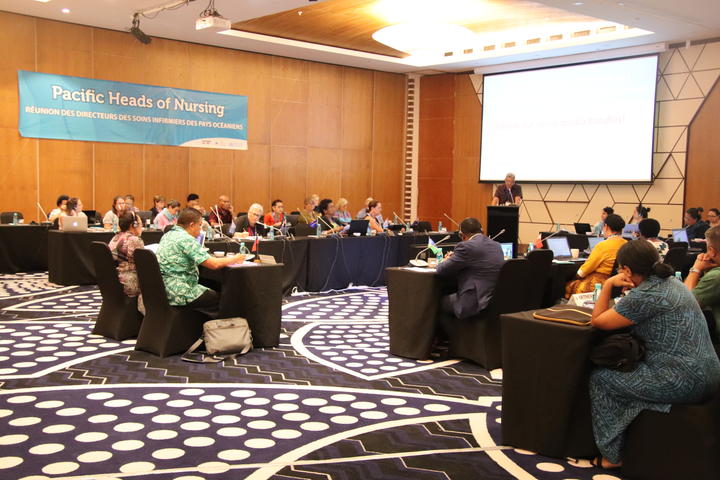 Delegates at the Pacific Heads of Nursing meeting in Fiji. Photo: Supplied/Pacific Community

The growing nursing shortage in the Pacific is sparking conversation over the industry’s future in the region.

Heads of nursing and midwifery from 13 countries and territories across the Pacific met for the first time in Fiji last week to discuss health emergencies and education.

Other topics included the mobility of workforces between countries especially during health emergencies, primary health care and regulation.

In some Pacific states, nurses and midwives make up 75 percent of the health workforce.

“Nurses are the heartbeat of the communities and workforce,” she said. “We work for the people and we are finally coming together as a unified voice to face up to the challenges.”

But while threats like the measles, dengue fever and the coronavirus were on the agenda, the region’s chronic shortage of nurses was also identified as a major risk.

Countries were urged to work closely with each other and their international partners to address the shortage.

The co-ordinator clinical services at the Pacific Community, Mabel Hazelman-Taoi, said the shortage had not only been caused by a lack of graduates but a combination of a lack of funding and training.

As it was the Year of the Nurse and Midwife, Ms Hazelman-Taoi said the meeting was timely.

But she warned that by 2030 it was predicted there would be a shortage of nine million nurses worldwide.

“That is concerning. So we hope this issue of workforce will be taken up and with the help of nursing now making a global campaign of raising the status and the needs of nursing that people will listen,” she said.

“But on the other hand, who does want to come into nursing? We need to try and attract more people to come in and do nursing.”

Delegates agreed there was a lack of funding and educational resources to accommodate qualified applicants at nursing schools.

The Director of Nursing in Nauru, Moralene Capelle, said without a nursing school her country was reliant on neighbours like Fiji to train its nurses.

“If we are to offer family contracts to each nurse we offer a contract to, we will find it difficult to accommodate that,” she said.

“There are other Pacific countries that are doing the same scheme where they are recruiting nurses from other Pacific islands to meet their shortage.

“So it’s becoming a competition.”

Solomon Islands Head of Nursing Michael Larui said sometimes he could not recruit as many nurses as his country needed.

“But due to budgetary constraints and challenges, like for example for us the government has currently a freeze on recruitment.”

“In a country where you have nurse-led programmes, you need effective leaders that will be able to co-ordinate administrative programs as well as public health,” he said.

“In the field of regulation, we have a Public Health Act that needs to be reviewed. It is now long overdue for a review.”

Mr Larui said the government had set aside $US2.3 million towards preparatory plans to combat the Wuhan coronavirus if it reached the country.

Along with more applicants than there are places in Pacific nursing schools, Fiji’s Chief of Nursing Margaret Leong said there was also a lack of postgraduate training.

But she said a positive development was the Fiji Nursing Specialisation Framework.

“Nurses would jump from clinical setting into management because there was no career pathway for them,” she said. “They couldn’t grow professionally.

“So this framework allows nurses to stay within the career specialisation and provides a career pathway for them to develop professionally and also be rewarded financially.”

Ms Leong said nurses needed to be able to specialise so they could move into advanced roles.

Delegates agreed the lack of nurses in the region was also affecting one of its health priorities – vaccination.

Ms Hazelman-Taoi said people needed to learn how best to protect their communities and provide a platform to influence and drive priority health initiatives in the region.

“The emphasis still is how do we get our children vaccinated,” she said.

“Some countries have done it so well and some countries are working towards it. And there’s a lot of issues around this.

“Can people come and get vaccinated easily or can nurses have the transport to move out to the outer islands to get other people, our population vaccinated who are isolated?”

Recommendations from the meeting – including the establishment of a regional forum – will be presented at the Pacific Heads of Health meeting in April.