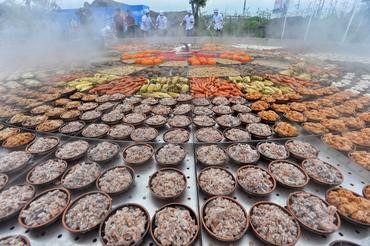 FILE PHOTO: Steamed dishes are seen on a giant food steamer for an event at a tourist attraction in Xiantao, Hubei province, China April 26, 2019. REUTERS/Stringer

Mukbang videos originated in South Korea and are increasingly popular in China, but they have faced sharp criticism from state media and regulatory crackdowns – especially since President Xi Jinping launched a campaign to curb food wastage last year.

The country’s graft watchdog, the Central Commission for Discipline Inspection (CCDI), said video-hosting platforms should strengthen their supervision, stop and remove inappropriate broadcasts and block the accounts of offenders.

Punishments for people uploading such content should also be toughened, the commission said in an article posted on its website on Saturday, noting that binge drinking videos have become more popular following a clampdown on heavy eating streams.

“Behaviour such as ‘heavy drinking videos’ not only damages the physical health of the presenters and causes food waste, but also promotes an ugly mentality and seriously harms the healthy ecology of the industry,” it said.

The watchdog said some people uploading mukbang videos were earning as much as 3,000 yuan ($458) in pledges by fans.