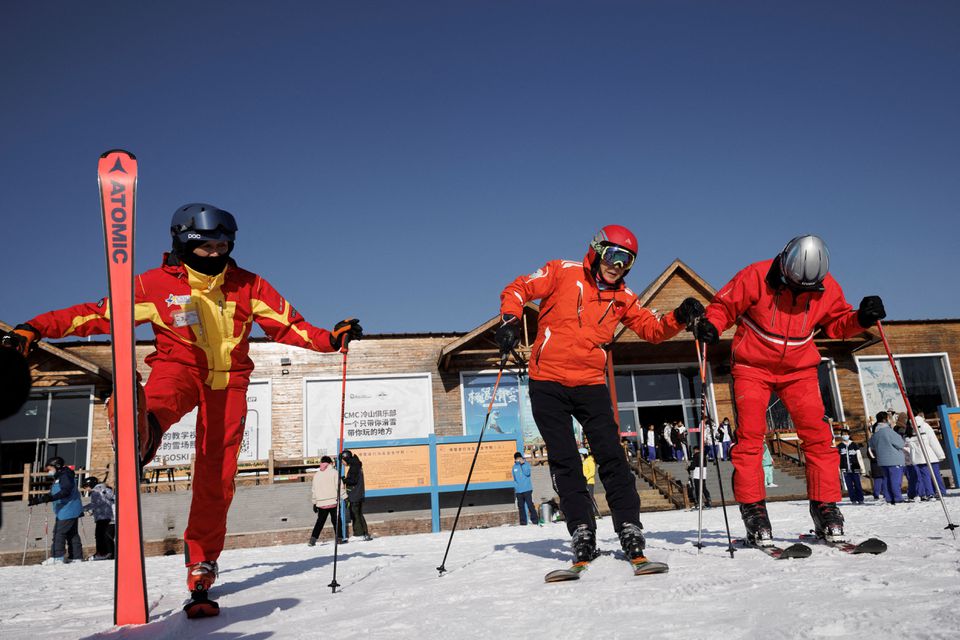 BEIJING, Jan 14(Reuters) – Shan Zhaojian stretches his arms and legs to warm up as the 83-year-old prepares to ski down a mountain just outside China’s capital of Beijing.

The bespectacled skier is technically retired, but thanks to his nickname as China’s “father of skiing”, he has been a prominent icon in the country’s campaign to encourage an interest in winter sports as it gears up to host the Winter Olympics from Feb. 4-20.

Shan has become a well-known advocate for the sport in the country in the decades since he was China’s first national skiing champion in 1957.

“At that time, we had no such things as ski outfits and had no idea that there were such a thing as professional skiing clothes,” he said.

Shan, who hails from China’s mountainous and wintry northeastern Jilin province, joined a professional skiing training team in 1954 at 16. At the time, he recalled, he trained in his normal daily clothes, donning another layer when they got wet.

He made his own wooden skis, sometimes seeking help from a friendly carpenter to help improve them.

He retired at 24 because of injuries but continued to play a prominent role in the sport, taking up positions such as the secretary-general of the Chinese Ski Association, from which he has retired.

He has also become a ski historian, with a focus on China’s Altay region, where he says cave paintings that date back thousands of years indicate that skiing started in China rather than Russia. The snow-covered region sits in the north of the country’s far western Xinjiang province.

China has said it wants to become a winter sports powerhouse, although it currently trails far behind the likes of Norway, Canada and the United States in terms of Olympic medals. To date, it has won a total of 13 gold medals since it first sent a team to the Winter Games in 1980.

Shan said that his country had made big strides in becoming globally competitive in the sport, but that his biggest wish for the upcoming Games was not for China to win medals, but to see the competition spur more ordinary people try winter sports.

“I’ve witnessed the development of China’s snow sports for 70 years and I know we are a beginner,” he said. “My hope is that the Olympics can popularise the Winter Games among the Chinese people.”