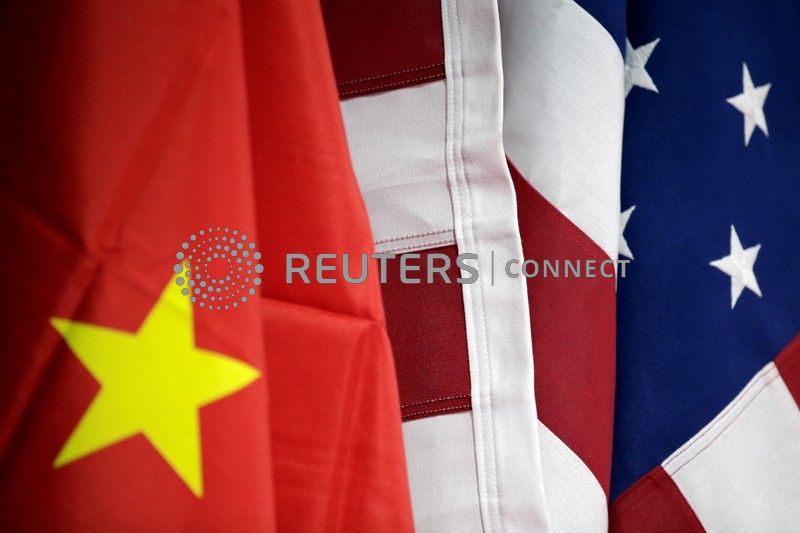 FILE PHOTO: Flags of U.S. and China are displayed at American International Chamber of Commerce (AICC)'s booth during China International Fair for Trade in Services in Beijing, China, May 28, 2019. REUTERS/Jason Lee/File Photo

China on Tuesday rebuffed a suggestion from U.S. President Donald Trump that Beijing needs a trade deal with the United States because its economy is slowing, saying this was “totally misleading” and that both countries wanted an agreement.

Trump, in a Monday tweet, seized on slowing economic growth in China as evidence that U.S. tariffs were having “a major effect” and warned that Washington could pile on more pressure.

Official data on Monday showed China’s economic growth cooled to 6.2% in the second quarter, the weakest annual pace in at least 27 years, amid trade pressure from the United States. In the first half, the economy grew 6.3 percent compared with a year earlier.

China’s stable growth was good for the world and also the U.S. economy, Geng told a daily news briefing.

“As for United States’ so-called ‘because China’s economy is slowing so China urgently hopes to reach an agreement with the U.S. side’, this is totally misleading,” he added.

Both China and the United States wanted to reach a trade deal, not China alone, Geng said.

Many people in the United States strongly opposed the tariffs and the trade war, he added.

“I again call on the U.S. side to work hard with China, meet each other halfway, and on the basis of mutual respect and treatment, strive to reach a mutually beneficial, win-win agreement. This accords with the interests of both countries and is what the international community expects.”

Trump and Chinese President Xi Jinping last month agreed to another truce in the year-long trade spat between the world’s two largest economies.

That agreement, announced after the leaders met in Osaka, Japan, was aimed at kickstarting stalled negotiations, but no deadline has been set for the process to conclude.

Hu Xijin, editor of the widely-read Chinese tabloid Global Times, published by the ruling Communist Party’s official People’s Daily, responded on Twitter to Trump’s comment, asking if it was “noble for a president to gloat”.

“6.2% is much higher than U.S. growth. Wait until U.S. growth hits 6.2% then laugh at China,” Hu tweeted. “Chinese economic growth slows down because of restructuring. The credit doesn’t go to the White House.”

The People’s Daily said it was “laughable” to say the Chinese economy was being given trouble by the U.S. tariffs.

“From trade and investment to technology, China is contributing more and more positive energy to global development,” it said in a commentary. “These irrefutable facts are not negated by anyone raising a hubbub.”