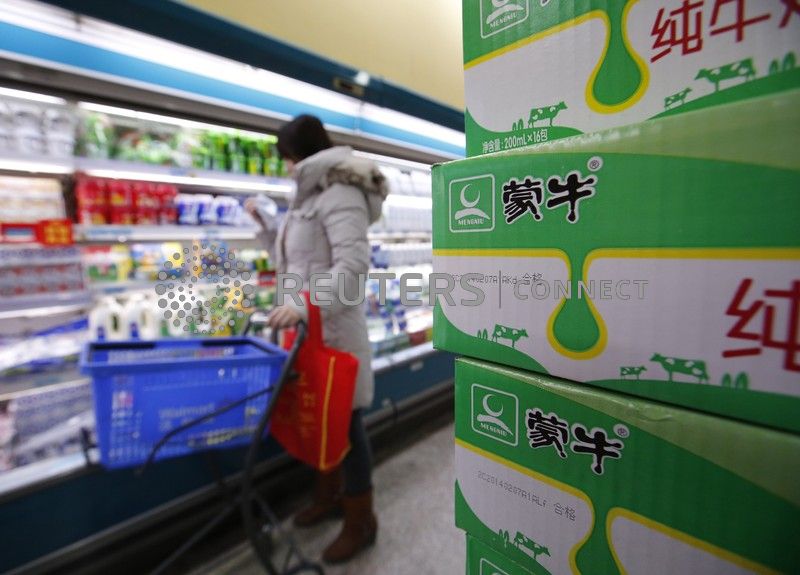 Bellamy’s shares soared as much as 56% to the highest in more than a year after the news.

The deal offers Bellamy’s investors a way to cash out of a prospect that has spent years awaiting approval to sell product in its target market, China, while giving Mengniu a prized consumer brand. Foreign formula remains sought after in China following a contamination scandal a decade ago.

“We were approached (and) we thought long and hard around potential opportunities and risks against our current plan which we were very confident in,” Bellamy’s CEO Andrew Cohen said.

“On balance, we believe this is a fair and good offer for shareholders,” he added on an analyst call.

Bellamy’s profits halved in the year to June, as a Chinese rule requiring online purchases to be cleared through state-approved warehouses crimped its informal “daigou” exports.

But Mengniu CEO Lu Minfang said the world’s second-biggest dairy company was drawn to Bellamy’s reputation for quality and its supply chain in Australia.

Bellamy’s shares touched a high of A$12.98, but stayed below the total offer price of A$13.25 as investors left room for the possibility of the deal falling through. The offer is at a 59% premium to the last close.

When the former family business from the island state of Tasmania listed five years ago, its shares were issued at A$1 but traded over A$23 amid hopes the company would capitalise on seemingly insatiable demand for its formula in China.

“The timing of the offer is somewhat opportunistic given BAL’s earnings are depressed and the delay in receiving (Chinese) approval,” Morgans Stockbroking analyst Belinda Moore said in a note.

When Bellamy’s reported its bleak annual numbers last month, it said it was still waiting for an approval from China’s State Administration for Market Regulation to ship formula to the country from an Australian facility it purchased in 2017.

It had also pushed out a A$500 million a annual sales target by at least a year, citing uncertainty over when it would get full Chinese regulatory clearance.

Australia’s Foreign Investment Review Board (FIRB) has taken a hard line in recent years on Chinese takeovers of assets like gas pipelines and agricultural holdings deemed sensitive from a national security perspective.

Australia last year banned China’s Huawei from supplying equipment for a 5G mobile network, in line with the stance of its ally the United States.

Andrew Wilkie, an independent lawmaker from Tasmania, said in an email the deal needed “a very stringent assessment of whether or not the public interest is served”.

“Many Australians will be uneasy with this sale for all sorts of reasons, and it’s important that the FIRB be seen to act quickly and competently and be prepared to stop it if need be,” Wilkie said.

Tony Makin, an economics professor at Griffith University, said FIRB had tightened its scrutiny of China-originating deals but Mengniu-Bellamy’s would “most likely proceed as a standard foreign investment proposal not influenced by security concerns”.

Bellamy’s Deputy Chair John Murphy said the company was cooperating with the regulator and that the process “has a way to run (but) we’re feeling very positive”.