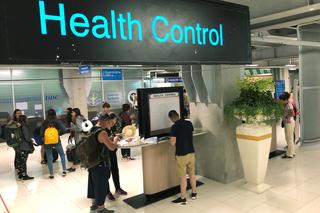 Tourist line-up in a health control at the arrival section at Suvarnabhumi international airport in Bangkok, Thailand, Januaruy 19, 2020. REUTERS/Jorge Silva

BEIJING (Reuters) – An outbreak of a new coronavirus in China has spread to more cities, Chinese authorities said on Monday, as the number of patients tripled and a third person died, stoking concerns about the containment of the virus.

The Daxing health commission in the capital Beijing said it had confirmed two cases of coronavirus, while the southern Guangdong province’s health commission confirmed one case in Shenzhen. They mark the first cases in China beyond the central city of Wuhan where the virus first emerged.

The Wuhan Municipal Health Commission said 136 new cases of pneumonia caused by the coronavirus strain had been found in the city over the weekend, adding to 62 already known cases. A third death occurred on Saturday, the authority said in a statement.

This brings the total number of known cases worldwide to more than 200, underscoring the challenge for health authorities seeking to contain the outbreak.

Hundreds of millions of Chinese tourists will be traveling domestically and abroad during the Lunar New Year holiday period that starts later this week.

A report by London Imperial College’s MRC Centre for Global Infectious Disease Analysis estimated that by Jan. 12 there were 1,723 cases in Wuhan City with onset of related symptoms. Chinese health authorities have not commented directly on the report.

Authorities around the globe, including in the United States and many Asian countries, have stepped up screening of travelers from Wuhan. Outside China, two cases have been reported in Thailand and one in Japan, all involving people from Wuhan or who recently visited the city.

The virus belongs in the same family of coronaviruses as Severe Acute Respiratory Syndrome (SARS), which killed nearly 800 people globally during a 2002/03 outbreak that also started in China.

Its symptoms include fever and difficulty in breathing, which are similar to many other respiratory diseases and pose complications for screening efforts.

China’s National Health Commission said on Sunday it will step up prevention efforts, but acknowledged it still doesn’t know the source of the virus.

Shares in pharmaceutical firms and mask makers in China surged Monday because of the outbreak.

The outbreak was one of the top trending topics on Chinese social media platform Weibo, where many users expressed concerns about their safety.