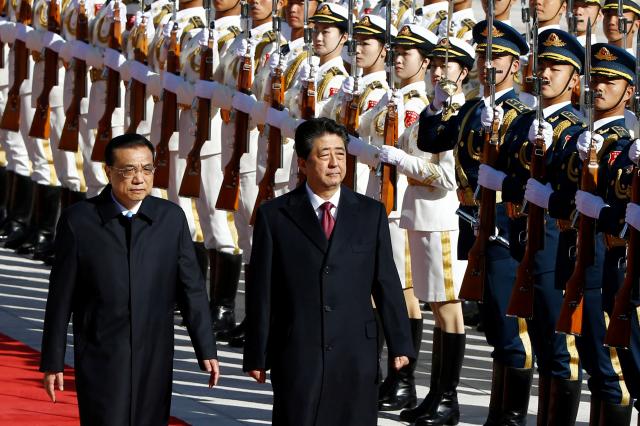 BEIJING (Reuters) – China and Japan should safeguard free trade and anchor global growth, Chinese Premier Li Keqiang said on Thursday, as Japan’s prime minister arrived in Beijing on a visit against a backdrop of trade friction with the United States.

Shinzo Abe’s three-day visit is expected to carve out new scope for cooperation between Asia’s two biggest economies. It is also expected to promote trust, which has been fragile at times since they restored diplomatic relations in 1972.

“We hope both sides would work hard to promote regional peace, safeguard multilateralism and free trade, and become the axis of stability, growth and momentum for not just Asia but the world,” Li said in a speech at Beijing’s Great Hall of the People.

Abe who arrived hours earlier on his first formal bilateral summit with Chinese leaders in seven years, said their two countries were playing “an indispensable role in the economic development of not just Asia but the world”.

In the past year, China has stepped up its outreach to Japan and others as it locked horns over trade with the United States.

Japan has trade problems of its own with the United States.

While worried about China’s growing naval power, Japan is also keen for closer economic ties with its biggest trading partner, but it must manage that rapprochement without upsetting its key security ally, the United States.

Abe, who returned to power in 2012 when Sino-Japanese ties were in tatters due to a feud over East China Sea islands, has met Chinese President Xi Jinping many times since their first chilly conversation in 2014 on the sidelines of a regional summit in Beijing.

But his meeting with Xi on Friday will be the first full-scale Sino-Japanese summit since 2011.

Flags of both countries lined Changan Avenue, a thoroughfare that cuts through the heart of Beijing near Tiananmen Square.

The neighbors are due to sign about 50 project memorandums of understanding during Abe’s visit, according to a draft document seen by Reuters.

Projects range from energy and healthcare to finance and automobiles, the draft showed.

“We would like to push ahead with cooperation in third countries as part of our Belt and Road initiative, and drive bilateral cooperation to the next higher stage,” Li said.

But the Belt and Road project has come under fire for saddling poor nations with debt through big projects that are not economically viable. China rejects the criticism.

Japanese defense officials are wary of its military implications, and Tokyo is pushing its Free and Open Pacific Strategy to promote trade and infrastructure in Asia, Africa and the Middle East.

Japan also hopes for progress toward implementing a 2008 agreement on jointly developing gas fields in disputed waters, and wants China to ease import limits on produce from areas affected by the 2011 Fukushima nuclear disaster.

Despite the thaw in ties, mistrust persists.

War-time history still rankles, with China often complaining that Japan has not fully atoned for its occupation of parts of China before and during World War Two.

“Just looking how the flags of both countries are hung next to each other on Changan Avenue makes me uncomfortable,” said a user on China’s Weibo microblog platform.

Some other users urged caution during Abe’s visit, accusing an “ambitious” Japan of being a two-faced neighbor.

But both sides will be hoping more visits will follow.

“If Xi promises to come to Japan next year, that would be very big,” said Kiyoyuki Seguchi, research director at the Canon Institute for Global Studies in Tokyo.

“If that is realized, the improvement in Japan-China relations will accelerate.”