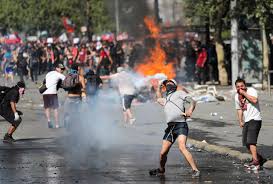 SANTIAGO (Reuters) – Lawmakers who attended a crisis summit with Chilean President Sebastian Pinera’s ruling coalition called on Tuesday for reforms to tackle inequality in response to countrywide riots that sowed chaos in the South American nation and led to 15 deaths and the arrest of more than 2,600 people.

Frustrations over the high cost of living and metro fare hikes in Santiago have become a political flashpoint against the center-right government of Pinera who urged talks with lawmakers to define a “new social contract.”

Almost all of the key left-leaning opposition parties rejected the invitation to talks until Pinera showed proof of safeguarding the human rights of protesters amid reports of heavy-handedness by security forces during a weekend of riots.

Members of Pinera’s coalition and a handful of opposition figures who did attend the talks told reporters they had pushed for quick and sweeping reforms to quell the unrest and economic inequality.

“The president needs to listen to what the people are asking for, which is profound social change. He must listen to the people, not just political parties,” said former foreign minister Heraldo Munoz, head of the center-left Democratic Party (PPD).

Some politicians and protesters pointed to a leaked audio recording of first lady Cecilia Morel as proof of a disconnect between Pinera, a billionaire businessman who introduced credit cards to Chile in the 1980s, and ordinary voters.

“We’ve been overrun, it’s like an alien invasion,” Morel said in the audio, which was confirmed authentic by the authorities. “We’re going to have to cut back on our privileges and share with the rest of them.”

Protesters, still unsatisfied, gathered again in central squares in Santiago and in other cities on Tuesday as the demonstrations against inequality showed little sign of ending. Police in places began to disperse the crowds with gas and water canons. The protests were bigger than demonstrations on Monday.

Ten cities have been placed in a state of emergency and under a night curfew overseen by the military after riots broke out on Friday in the worst unrest in decades in one of Latin America’s most stable countries. The curfew was confirmed again for Tuesday night.

Rioters destroyed much of Santiago’s metro system, among the region’s most modern and extensive, causing upwards of $200 million in damages. Vandals looted hundreds of grocery stores, homes, hospitals, and government buildings throughout the country, leaving widespread wreckage in once subdued cities.

Amnesty International on Tuesday said in an open letter to Pinera that it was concerned over human rights violations, and limitations imposed by the military during city-wide evening lockdowns.

“The sole fact that some groups or people have committed acts of violence in a protest does not authorize security forces to dissolve them with the use of force,” Amnesty International Americas director Erika Guevara said.

The military general in charge of security in Santiago said he was aware of videos circulating on social media suggesting brutality by police or the military in dealing with protesters and vandals.

“We are investigating every one of these situations. We’re not going to hide anything,” General Javier Iturriaga told reporters.

In a heated exchange with reporters, he said 11 people had died in arson attempts, looting and rioting in Santiago, while two people had died of gunshot wounds. Two others died in vehicle-related accidents, one outside of Santiago and one, further south, in the port city of Talcahuano.

The Chilean Institute for Human Rights said by Monday night it had registered 84 people injured by firearms.

U.N. human rights boss Michelle Bachelet, a former president of Chile, called on Monday for independent investigations into the deaths in weekend protests, citing “disturbing allegations” of excessive use of force by security forces.

The widespread protests sowed destruction across the city. Street cleaners and working parties of volunteers on Tuesday struggled to tidy and repair Santiago’s central Plaza Italia, the focal point of much of the unrest, was littered with broken glass and stone, graffiti and still-smoldering fires.

By mid-day, protests had resumed anew there.

Many downtown streets still reeked of tear gas, and the majority of schools across the city remained closed on Tuesday.

Traffic and public transportation were snarled across the city during the morning rush hour.

Roxana Yanez, 56, a factory worker, said she had had a difficult commute.

“On the one hand, we support these protests. We don’t earn much, just enough to pay our bus fare,” she said. “What we don’t support is disorder, riots, looting. That doesn’t help.”

The protests were sparked by an increase in public transport fares in early October. But they reflect simmering anger over intense economic inequality in Chile, as well as costly health, education and pension systems seen by many as inadequate.

“This won’t stop until people see real change,” said Brandon Rodriguez, 25, a security guard. “Governments of the left and right have come and gone…but nothing changes for ordinary people.”

The unrest has yet to dock copper output in Chile, the world’s top producer, mining officials said.

At Santiago’s international airport, many passengers were stranded after hundreds of flights were canceled by major airlines over several days and airlines laid out camp beds on the airport forecourt to accommodate them.