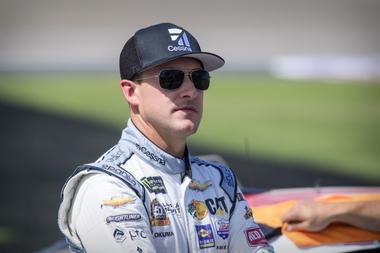 Daniel Hemric will not drive the No. 8 Chevrolet for Richard Childress Racing in 2020, the team announced Tuesday.

Hemric, a rookie in the Monster Energy NASCAR Cup Series, has been with RCR for three years and previously competed for the team in the Xfinity Series. He also has driven in the Truck Series.

The 28-year-old has two top-10 finishes this year and an average finish of 22.7. He stands in 25th place in the Cup Series standings. He does not have a win in the Cup, Xfinity or Truck series.

“Richard Childress Racing (RCR) has exercised its option and will release Daniel Hemric as driver of the No. 8 Monster Energy NASCAR Cup Series Camaro ZL1 effective at the conclusion of the 2019 NASCAR race season,” the team’s statement said. “… Additional information on RCR’s Cup program will be announced at a later date.”

The release of Hemric opens a spot for 23-year-old Xfinity driver Tyler Reddick, who is part of the RCR crop of drivers. Owner Richard Childress said earlier that the only way to keep Reddick, the defending Xfinity driver, was to promote him to the Cup series.

“He’s going to be a superstar,” Childress said in July, per NBC Sports. “We hope to be able to keep him, but you know how this sport is. It boils down to dollars. We want to keep him here if there’s any way. If not, I want to see him in a good situation.”

Childress continued: “That’s our goal right now is to try to put him in a Cup car. “That’s what he wants to do. That’s the reason he came to RCR, because he knew we had Cup cars and Cup experience.

Hemric responded to his release on social media.

“Forever grateful to Richard & everyone at @RCRracing for the opportunity,” Hemric said. “I’m disappointed it ended like this, but we’ve got nine more races together & some team goals that are still within reach. I’m going to do all I can to make sure we get those & finish the season strong.”