Children take a dip in nearby river 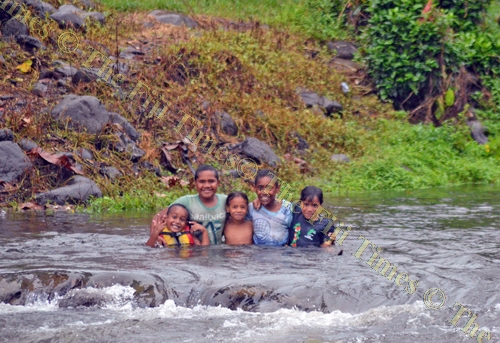 WHILE children in urban centres spend their time during the school holidays in amusement centres and cinemas, it will be a different story for the children of Qeleni Village on Taveuni.

Children in the village will spend most of their holiday period frolicking in the cool village river with their friends.

During a recent visit to the village, this newspaper met children in the village who were enjoying themselves in the Qeleni river having a late afternoon swim.

Student Mereani Sivoimacuata said children would have picnics by the riverside catching prawns and cooking them on open fires.

Ms Sivoimacuata said the experience was fun because it was something different from the usual schedule of studying inside the enclosed walls of their classrooms.

Meanwhile, Qeleni Village elder Apolo Korovuka said they had been advising parents in the village to be mindful of their children as they enjoyed themselves in the river.

Mr Korovuka said it was always good to be cautious in order to prevent mishaps.

He said they expected more children from around the country in the village during the school break to celebrate Christmas and New Year with their family members.