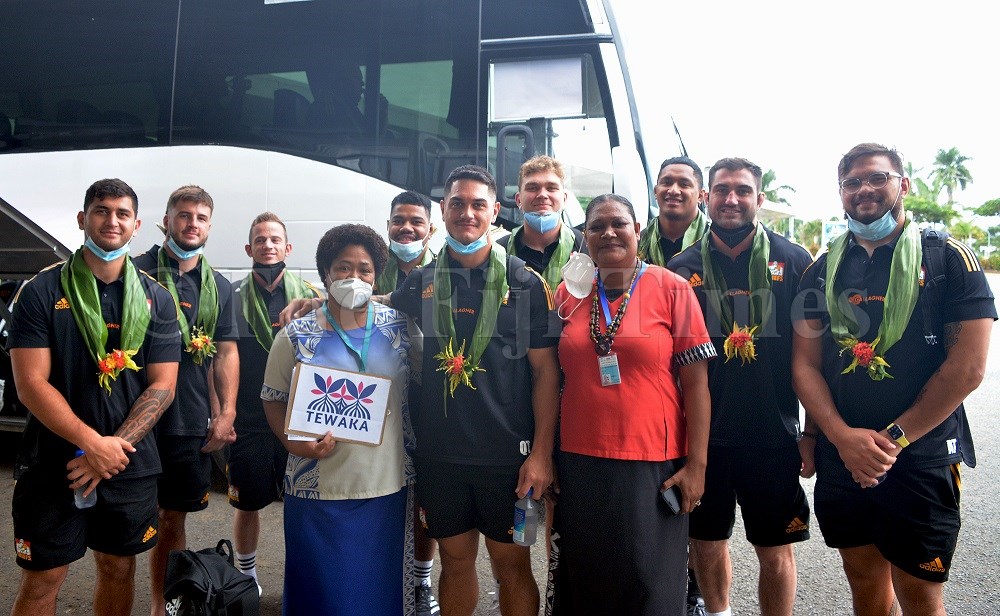 Ana Qoro along with Lusia Balekawa with members of the Chiefs rugby side at Nadi International Airport. Picture: BALJEET SINGH

Chiefs coach Cameron McMillan says they are under no illusions of the challenge they face in the last round of the Super Rugby Pacific campaign against a Fijian Drua side playing in front of its home crowd tomorrow.

The franchise team, with players from the Waikato region in New Zealand, touched down yesterday at the Nadi International Airport knowing a win is needed to secure a home playoff game. But they remain wary of the challengers.

“Playing at home, we saw they grew another leg,” McMilland told Super Rugby of the Drua’s earlier game against the Highlanders.

“It will be foreign conditions to us, with the heat, humidity and, potentially, some tropical downpours, the state of the ground. We’ve got no control over those things.

“We know it’s going to be a bit of a festival atmosphere, but a fairly hostile one.

“We’re under no illusions as to the challenge. They’re a good team with some powerful athletes.

“That we’ve got them last, and they’re at home with nothing to lose, makes them as dangerous as anyone.”

McMillan said the Drua had worked on their set-piece which was good, but they retained their unpredictability, athleticism and skill.

“When they’ve displayed that in games they’ve been a challenge at times for every team,” he said.

McMillan said the Fijians were conservative earlier in the season but have since reverted to their traditional game. Halfback Brad Weber said Fijian Drua’s inclusion in the competition had provided a new flavour and “a fair bit of razzle”.

“It’s exciting. We’ve taken three home games to Fiji in the last four or five years, so we are no strangers to playing in Fiji, a lot of us, and the support they get. Their inclusion has been great so far,” he said.