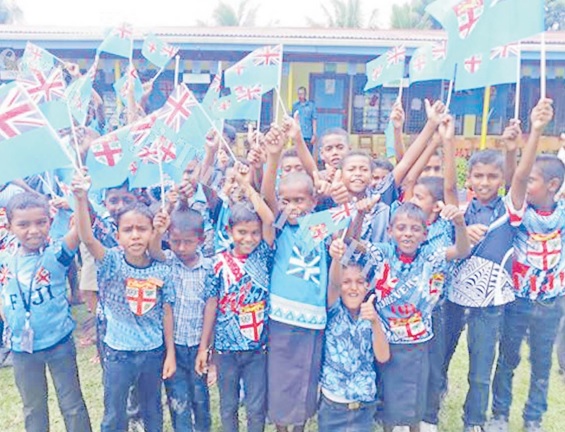 Children of Fiji ... In 1970, the Great Council of Chiefs wanted the common name for all Fiji citizens to be Fiji Islanders. Picture: FT/File

Below is the editorial comment that appeared in The Fiji Times of Monday, March 9, 1970 on the debate of Fiji’s common name prior to independence.

The Council of Chiefs has been quite adamant that the common name for the people of Fiji should not be Fijians, as was suggested unofficially last year (curiously,  considering the association’s name and limitations on membership) by the Fijian Association’  convention.

Instead, the chiefs have proposed that the common name should be Fiji Islanders and that the term Fijians should be applied only to the indigenous people, as it is now. The chiefs’ recommendation will go to the Governor and no doubt there will be much discussion of them at both official and unofficial levels.

No hasty decisions can be taken on a matter of such importance as a common name in any multi-racial society. But it is obvious that the Fijian people themselves and their leaders feel that with the approach of dominion status for Fiji, a common national name is necessary.

What it should be will need a lot of thought by people of all races and at all levels of community life.

The Fijian chiefs have opted for Fiji Islanders, which The Fiji Times put forward some time ago  as one suggestion worthy of serious consideration.

Since then The Fiji Times has adopted the term as part of its newspaper presentation style when a name is needed to embrace all the people of Fiji. We feel that Fiji Islanders is a much better term than the stilted phrase “Fiji People” and has much to commend it.

There are precedents for the use of the word “islander” in our suggested common name, which has now found approval with the Council of Chiefs. In our own part of the world, there are Cook Islanders, Solomon Islanders and Ellice Islanders.

Beside them, Fiji Islander is a simple term. Fijians is unacceptable, because in time the use of it would diminish the image of the indigenous race  and their cultural heritage in the eyes of the world.

And it should be remembered that probably the most important reason for a common name is to give Fiji’s people an identity overseas.

This country will soon reach full nationhood and will be taking its place, on its feet, in such world  council as the UN. A common name in the English language which has become the main international lingua franca, is needed urgently.

THE Queen begins her two-month visit to the furthest flung members of the British Commonwealth today.

March 3 THE Fijian Association will recommend to the Great  Council of Chiefs that the name “Fijian” be used as a possible common name to identify the citizens of Fiji.

The  recommendation will be submitted to the council when it meets in Suva on Friday.

Members of the Fijian Association discussed the issue at its joint 1970 meeting which opened in Suva yesterday.

TRADITION, both solemn and colourful will play a large  part in the way Fiji welcomes and honours the Queen. Be- fore she steps ashore in Suva, six Fijian chiefs will perform  the “cavuikelekele” on the Royal Yacht Britannia.

THOUSANDS of wildly excited people at Churchill Park in Lautoka last night broke through police cordons to get a closeup view of the Queen, Duke of Edinburgh and Princess Anne. St John Ambulance Brigade officers will come from Vatukoula, Navua and Nausori to help man fi rst aid posts in Suva during the Queen’s visit.

UP to 48 per cent of outpatient attending the Colonial War Memorial Hospital in Suva have no idea about what to do with the medication given to them.

They take their medicine home to find a relative or neighbour who can read the English instructions on the bottle’s label and how  much medicine to take.

OVERSEAS reporters walked out a Royal feast at Nukualofa on Saturday after a mix-up over seating arrangements.

Photographers also criticised the facilities available  for covering the visit and complained of being jostled by police.

They said press arrangements was much better in Fiji where reporters and photographers had been allowed more freedom.

THE Queen, the Duke of Edinburgh and Princess Anne visited the site of one of Tonga’s archaeological Mysteries on Saturday during their short stay on the tiny Kingdom.

King Taufaahau accompanied the royal family to Heketa where they inspected an archway built from coral stone.

The structure is 17 ft high and has a 20ft long crosspiece. It is estimated to weigh 30 tonnes.

LEADERS of farmers would not hesitate to go to court to get an injunction if South Pacific Sugar Mills Ltd refused to crush this year’s crop, the secretary of the Alliance Cane Contract Committee, Mr M.T.Khan said yesterday.

The  Federation of Canegrowers, a farmers’ organisation sup- porting the National Federation Party, may also take legal  action over the Denning award.

A WOMAN badly burnt her hands when she vainly res- cued a fi ve-year-old boy from his burning bed on Saturday.

A NAVUA businessman, Mr B.D.Lakshman, has sold 5982 acres of land at Deuba to the Pacific Hotels and  Development Company Ltd for $510,000. The Canadian- backed company has had an option on the land for some  years.

It intends to develop the area as a huge hotel and luxury residential resort.

TEN people who are squatting on freehold land between the Raiwaqa Housing Estate and Samabula have been given notices to leave to make way for the continuation of Grantham Raiwaqa. Three families interviewed yesterday  said they refused to leave unless alternative land was offered to them.

THE Sugar Price Stabilisation Fund will be abolished and  a new fund will be established to implement the recommendations made by Lord Denning in his award. The $6m  currently in the stabilisation fund will be transferred to a Sugar Cane Price Support Fund. A Bill to establish the new  fund and repeal the SPSF Ordinance was published yesterday.

THE Colonial Sugar Refi ning Company Ltd claims an important element of Lord Denning’s award is based on a mistaken view of the Sugar Price Stabilisation Fund. The company’s report recalls that Lord Denning said the fund was built up out of a subsidy provided by the people of the  United Kingdom under the Commonwealth Sugar Agree- ment.

ONLY two Fiji companies has so far used a scheme un- der which their staff could be given management training  in NZ, the Minister for Labour, Ratu Edward Cakobau, said when he opened a managerial course in Suva yesterday. He recalled that the New Zealand Government had agreed to the placement of trainees from Fiji with NZ companies.

A PERMIT to operate through Nadi airport has been  issued to American Airlines by the United Kingdom. How- ever, the number of times a week the airline will fl y through  the airport will depend on the outcome of discussions be- tween Australian and United States civil aviation authori- ties.

OVERCROWDING in both the waiting and office of the  Births, Deaths and Marriages section of the Registrar-Gen- eral’s office is becoming an increasing problem. The Registrar-General, Mr A.G.S.Anderson, said yesterday about  twice the present office space was needed and a consider- able increase in waiting room space was also necessary.

A MAN drowned and four children were missing last  night after a 28-ft punt carrying 29 people, 15 of them children, capsized in the flooded Rewa River at 4.30pm. Thirteen of the children were pupils of Vunimono Arya Samaj  School and were being taken by river to their homes at  Burebasaga about half a mile down river from the Wainibokasi landing.

SEARCHERS yesterday recovered from the Rewa  River the bodies of three children who were passen- gers in a punt that capsized on Thursday afternoon.  The search continued late last night for Chandra Wati, the only passenger still missing.

TWO people were killed and more than 20 injured  when a bus plunged from the road on Cuvu hill, Sigatoka, and rolled down a steep slope.

The accident occurred at about 4.45pm yesterday, almost half a mile  from the outskirts of a settlement in Cuvu, a resident, Mr Satish Prasad, reported.

HALF of the Government’s university scholarship funds should be reserved for Fijians, the Fiji Education Commission recommended in its report. In a chapter about Fijian “backwardness” in education, the report  says “there is indeed nothing to suggest any defi cien- cy in intellectual ability among the Fijians”.

A PETITION in which a Medical Department health inspector alleged that promotion due to him had been  denied because discrimination against him was re- jected by the Legislative Council yesterday.

THE people of the tiny island of Rotuma, 400 miles north of Suva, are pressing for direct representation in both Houses of Fiji’s proposed new legislature.

This was announced in Suva yesterday by Mr Wilson Inia, the senior elected member of the Rotuma Council.

The Fiji Housing Authority has been offered $16,500 by an unnamed donor of donors to establish  a public swimming pool at the Raiwaqa Housing Es-tate.

The authority has asked the Suva City Council to  administer the pool and to build changerooms, toilets and a fence.

SUGGESTIONS for legislation to control river craft were not put forward in 1954, a senior police officer  said yesterday. Such legislation was apparently considered unnecessary at the time. The police officer  was commenting on a report in The Fiji Times on Thursday about the loading of river taxis in the Rewa  River and the need for safety regulations to be introduced.

A GROUP of small, white-paint offices is mush- rooming up on the School of Education site at the University of the South Pacific. One of the new buildings houses a team of experts which could have an important influence on the development of Fiji’s man- power resources.

The three-member team forms the nucleus of an assessment unit financed through a Government grant.