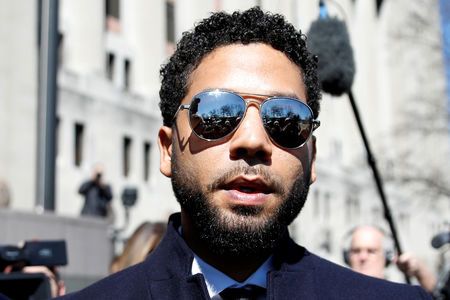 (Reuters) – The city of Chicago filed a lawsuit on Thursday against Jussie Smollett seeking three times the damages it said it incurred in the investigation of a hate crime that authorities allege the “Empire” actor staged.

The lawsuit, which did not specify the amount of damages, was filed in Cook County Circuit Court over two weeks after prosecutors dismissed the criminal charges against Smollett alleging he fabricated the Jan. 29 attack.

Chicago officials previously said they would sue Smollett after he refused a demand by the city for $130,000 to cover police overtime costs to investigate the actor’s claims.

The lawsuit said Chicago would seek “three times the amount of the damages the city sustained.”

The actor’s criminal defense attorney, Mark Geragos, did not immediately respond to a request for comment. Geragos, who in the past has represented celebrities such as Michael Jackson, previously said Smollett “will not be intimidated into paying the demanded sum.”

Smollett, 36, who is black and gay, ignited a firestorm on social media by telling police on Jan. 29 that two apparent supporters of President Donald Trump struck him, put a noose around his neck and poured bleach over him while yelling racist and homophobic slurs on a Chicago street.

After weeks of investigation, Chicago police determined that Smollett cooked up the scheme — in which they allege he hired two brothers to pose as his attackers — because he was dissatisfied with his salary on “Empire.”

Smollett, best known for his role on the Twentieth Century Fox Television hip-hop drama, has said he has always been truthful about the incident.

He was charged in February with staging the incident and filing a false police report, but Cook County State’s Attorney’s Office prosecutors dropped all charges against him in March.

Outgoing Chicago Mayor Rahm Emanuel described the decision as “a whitewash of justice.”

Smollett admitted no wrongdoing, but agreed to do community service and give up $10,000 in bond money.

It remains to be seen whether Chicago’s mayor-elect, Lori Lightfoot, will pursue the legal case when she takes office on May 20.

She said the State’s Attorney’s Office had to better explain why it dropped charges and there should not be the perception there was one set of justice for the “rich or famous” and another for everyone else.