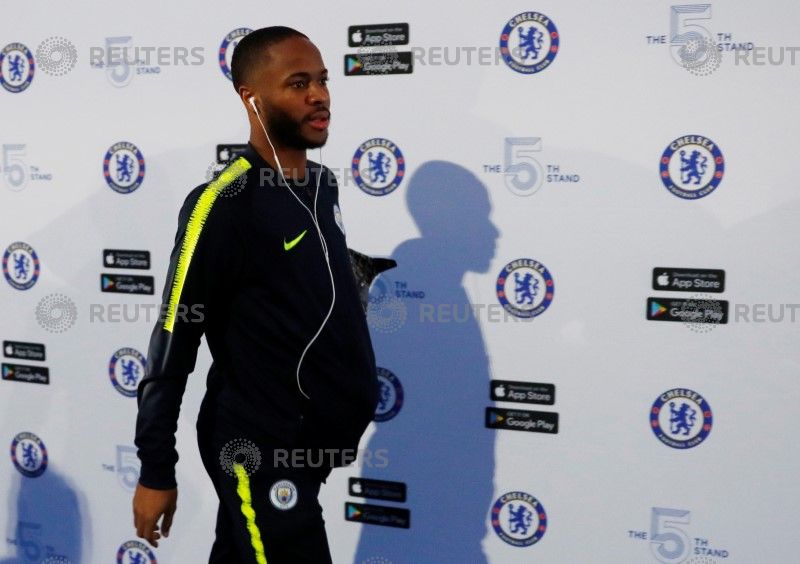 Chelsea said they were “fully supporting” a police investigation launched after a video posted online showed Sterling being shouted at by a fan as he went to collect the ball from behind the goal.

Asked about the remarks the fan made, Sterling told journalists on Sunday he “had to laugh” because he expected no better, adding that newspapers were “unacceptable” in their portrayal of young black players.

The Professional Footballers’ Association (PFA) said harsh treatment that Sterling was receiving from the media was fuelling racism on the terraces, reports of which had increased from last season.

“We commend Raheem for his professionalism during the incident,” the PFA – the trade union for players in England – said in a statement.

“We stand with him in calling for the press to consider the coverage of all footballers carefully, and to end their imbalanced coverage aimed at young, black players.

“We have been aware for a few months of the targeting Raheem faces in the press, it is evident that he is often singled out and treated more harshly than his colleagues.”

No arrests were made after Saturday’s match but the Metropolitan Police said they would review footage to determine whether any racist abuse took place.

Anti-discrimination charity Kick It Out said last month that reports of discriminatory abuse within football were up 11 percent from last season.

“While it may be true that no racial slurs have been used in the press coverage received by Raheem and others, we are in no doubt that the negative narrative influences public opinion and emboldens racist rhetoric,” the PFA added.

Former international John Barnes, who like Sterling played for England and Liverpool and faced racist abuse during his career, said the issue of discrimination went beyond the pitch.

“More often than not the media influences society… The only way we can change racism is if we change the perception of the average black person in the street and then you will have many more average black people being given what they deserve,” the 55-year-old told the BBC.

“It’s a very long-term process, we’re talking about hundreds of years of indoctrination ensuring that there are certain groups of people who are more worthy than others.”