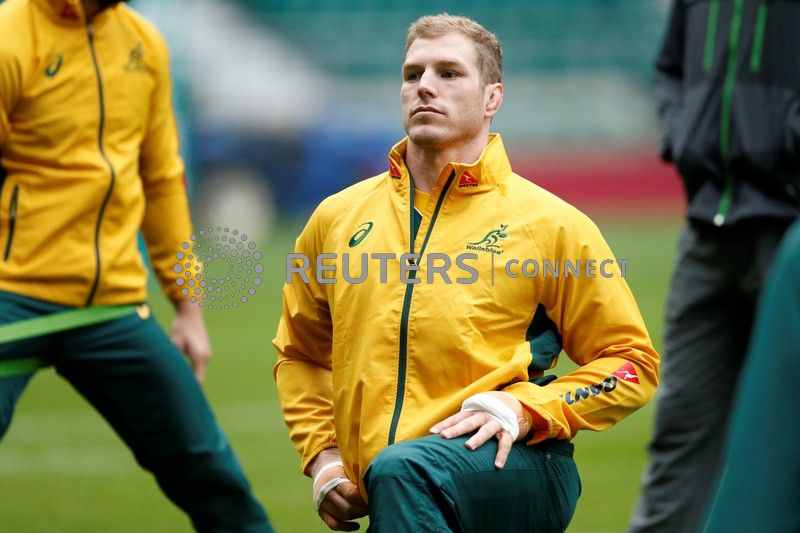 SYDNEY (Reuters) – An upbeat Michael Cheika said he had no concerns about the fitness of David Pocock after naming the loose forward in his World Cup squad on Friday but the Australia coach would not be drawn on how he planned to use him.

Barring the inclusion of uncapped teenager Jordan Petaia as a midfield option, there were no surprises in the squad that will take on Wales, Fiji, Uruguay and Georgia in the pool stage at the global showpiece in Japan.

Despite that, Cheika said the Wallabies would be making a virtue of unpredictability as they bid for a second straight final and third title at the Sept 20-Nov 2 tournament.

“It’s a bit of joke line for us but I think today in rugby there’s a lot of ‘by the numbers’ strategy. I think we’re working on more of a principles strategy.”

Openside flanker Michael Hooper will captain the Wallabies for the second World Cup and the party boasts 1,406 caps of test experience, 200 more than in 2015.

Adam Ashley-Cooper accounts for 112 of those and is set to become only the second Australian after George Gregan to play at four World Cups.

It was a reward, Cheika said, for what the 35-year-old brought to the squad as a leader, particularly in defence, and his ability to play in various positions across the backline.

With fullback Israel Folau no longer available after his sacking earlier this year over religious social media posts, there are now few Australia players who would be in contention for a World Select XV.

Pocock at his peak would have been an automatic pick and Cheika said he was certain the 31-year-old was ready to go despite having played almost no rugby since last November because of a calf injury.

“I’m definitely confident,” Cheika said. “I think there’s a couple of players who were just a little bit short (of fitness so were not included).”

Pocock, usually an openside flanker, played alongside captain Hooper in what became known as the “Pooper” back row to great effect at the last World Cup but Cheika was non-committal on whether he would reprise the unorthodox line-up.

“That’s the decision isn’t it? Michael’s the captain so it’s either them together or we make a decision and play one one match and one the other. We’ll just look at the Fiji game and decide what’s best for that and go from there.”

As in 2015, Cheika named only two scrumhalf options in Nic White and Will Genia and would not be drawn on who would be his emergency halfback option, a position filled by the now retired Matt Giteau four years ago.

He included three hookers in Tolu Latu, Folau Fainga’a and Jordan Uelese but there was no place for Tatafu Polota-Nau, who will stay in camp along with Luke Jones, Rob Valetini, Liam Wright and Tom Banks until after Australia’s final warm-up.

Cheika said centre Petaia, 19, had been unfortunate to miss out on making his test debut last November because of injury and had impressed him with his “durability and ability to learn fast”.

“I see so much potential there, it’s just a question of getting some of that out over the next month.”

Australia face Samoa in their final warm-up in Sydney on Sept. 7 and open their Pool D campaign against Fiji in Sapporo on Sept. 21.