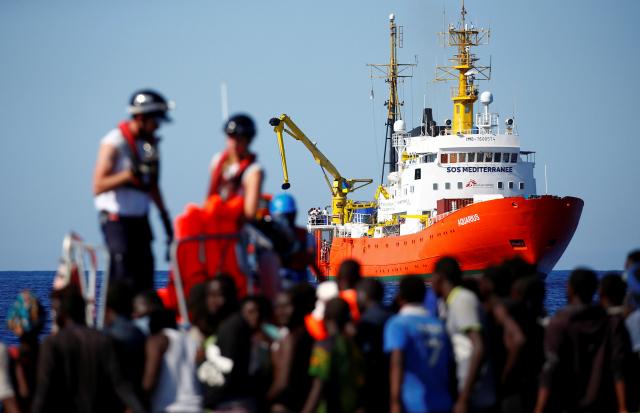 FILE PHOTO: The MV Aquarius rescue ship is seen as migrants on are rescued by the SOS Mediterranee organisation during a search and rescue (SAR) operation in the Mediterranean Sea, off the Libyan Coast, September 14, 2017. REUTERS/Tony Gentile/File Photo

ROME – A humanitarian group protested on Tuesday over Italian plans to make more than 600 migrants sail to Spain, rather than let them disembark immediately in Italy.

Spain agreed on Monday to take in the migrants, who were picked up off the Libyan coast at the weekend and are packed onto an overcrowded rescue boat, after both Italy and Malta denied them access to their ports.

But more than 16 hours after Spain made its offer, the Aquarius, which is operated by the charities SOS Mediterranee and Doctors without Borders, was still drifting at sea close to Malta, awaiting instructions over how to proceed.

With a storm approaching, Doctors Without Borders said on Tuesday that Italy wanted to transfer some of the 629 migrants onto Italian vessels and then head together to Valencia, Spain.

“This plan would mean already exhausted rescued people would endure 4 more days travel at sea,” Doctors Without Borders said on Twitter. “(We) call for people’s safety to come before politics.”

It added: “The better option would be to disembark the rescued people in the nearest port after which they can be transferred to Spain or other safe countries for further care and legal processing.”

Italy’s new, far-right interior minister, Matteo Salvini, looking to make good on election campaign promises to crack down on illegal immigration, closed the country’s ports to the Aquarius on Sunday saying other EU states should step in.

The standoff came ahead of a European Union summit later this month which is due to consider changes to asylum law to better share the burden of incoming migrants.

Italy brought fresh supplies to the Aquarius early on Tuesday ahead of the planned transfer of some of the migrants, who include more than 100 unaccompanied minors and seven pregnant women, to other boats.

SOS Mediterranee said an approaching storm would bring with it waves of over 2 meters (6.5 ft) making any trip to Spain highly uncomfortable