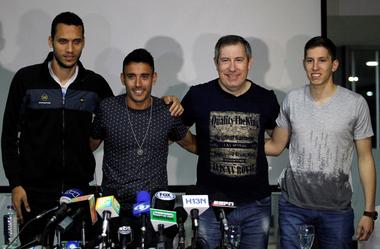 SAO PAULO (Reuters) – Rafael Henzel, a radio reporter who survived the crash that killed most of the Chapecoense soccer team in 2016, died of a heart attack on Tuesday, the Brazilian club said. He was 45.

Globo reported that Henzel collapsed while playing football in the southern city of Chapeco and despite being rushed to hospital he died soon after.

A highly respected figure in the area, Henzel returned to his radio job after recovering from the plane crash.

“Throughout his brilliant career, Rafael told the story of Chapecoense,” the club said on its web site. “He was a symbol of the club’s reconstruction and he will always be remembered in the green and white pages of this institution.”

Henzel was one of six people to survive the crash, which killed 71 of the 77 people on board. The flight was carrying the team to the first leg of the Copa Sudamericana final in Medellin when it crashed into a hillside. Three players also survived the crash.