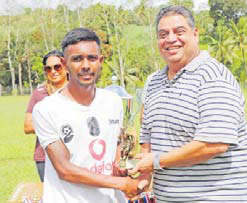 Chandra said this was his first award and was very happy.

“I am so happy I didn’t think I will be named the best player of the tournament and I thank my teammates for supporting me in the game which made me play my best,” said Chandra The Naiqere lad said his aim now was to play in the Premier Division.

“I will continue to play to my best to help Savusavu and help them return to the top level again and that is my aim.”

Savusavu has created history as they are the first team to engrave their name in the Fiji FA Presidents Cup after beating Nadogo 5-4 on penalty kicks.