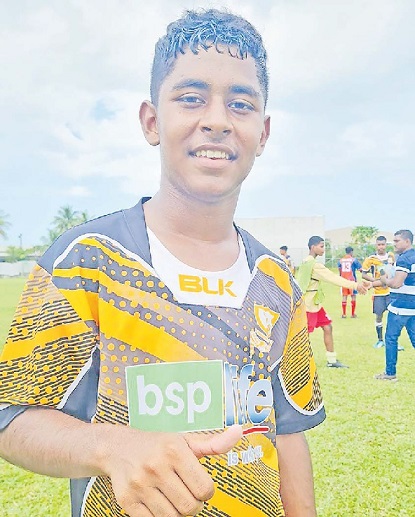 Avishaan Chand came in with a wonder strike which saw his Vunimono High School side beat Vashist Muni College 1-nil in the Southern Zone Secondary Schools under-17 competition in Suva yesterday.

The 14-year-old, who plays in the under-15 and under-17 divisions for his school, came in with a free kick from an acute angle outside the opposition penalty box.

His left foot strike left the VMC keeper with no chance of stopping the ball. For Chand, playing with the big boys has given him confidence to do better every time he takes the field.

“It is a great feeling playing with the boys who are two to three years older than me. I take it as a challenge and scoring the winning goal is just an amazing thing for me,” Chand said.

Chand was the player of the tournament during the Rewa Zone competition in the U15 grade. He captained the U15 side in that competition.

The midfielder said he was looking forward to the IDC.

“I hope my team is able to make it to the IDC and we are able to play against the teams from other divisions.”

His favorite international player is Christiano Ronaldo and he loves wearing number 7 jersey while he is a big fan of Fijian wonder boy Roy Krishna.

Apart from football, Chand loves fishing, dancing, singing and making friends. He also shines off the field as he is a very talented dholak and harmonium player and sings kirtan as well.

The former Saraswati Primary School student said football meant a lot to him.

“My dream is to become a professional footballer and to be the best player I can be.”

This determined young football devotee with stars in his eyes has an instinctive feel for the values conveyed by Fiji Football – in particular, the belief that football should be available to everyone, everywhere.

“Without football, life wouldn’t be as vibrant,” he emphasises.

“It wouldn’t be as colourful.”

Meanwhile, the loss has put Vashist Muni Collge out of contention for a spot at the secondary schools IDC.