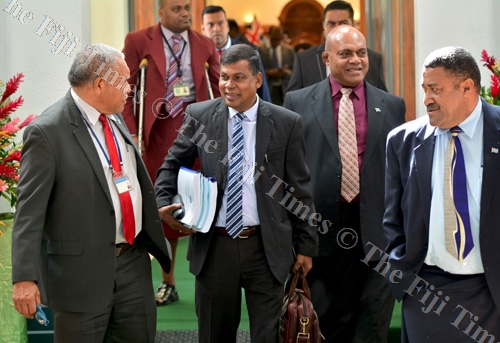 OPPOSITION member of Parliament Parmod Chand has accused Government of trying to win a seat on the UN Human Rights Council by rushing to ratify two UN Conventions. He made the claim while speaking on a motion to ratify the International Covenant on Civil and Political Rights (ICCPR) and International Covenant on Economic, Social and Cultural Rights (ICESCR) in Parliament yesterday.

“Madam Speaker, we hope also that this rushed ratification is not only Fiji’s campaign to win a seat on the UN Human Rights Council this year. We have raised this time and time again,” Mr Chand said.

In his response, Acting Prime Minister and Attorney-General Aiyaz Sayed-Khaiyum said it was unpatriotic for Mr Chand and the National Federation Party to make such comments.

“We are not doing this to satisfy some seat on the UN Human Rights Council. We gave an undertaking, we are fulfilling it,” Mr Sayed-Khaiyum said.

“The comments by Honourable Chand and NFP are very unpatriotic. If they were truly concerned about furthering the culture of human rights in our country, they would actually push for us to have a seat on the UN Human Rights Council. We need to be patriotic about that,” he said.

He also pleaded with the Opposition to leave the director of human rights alone because he was doing his job. Parliament last night agreed to ratify the two conventions.