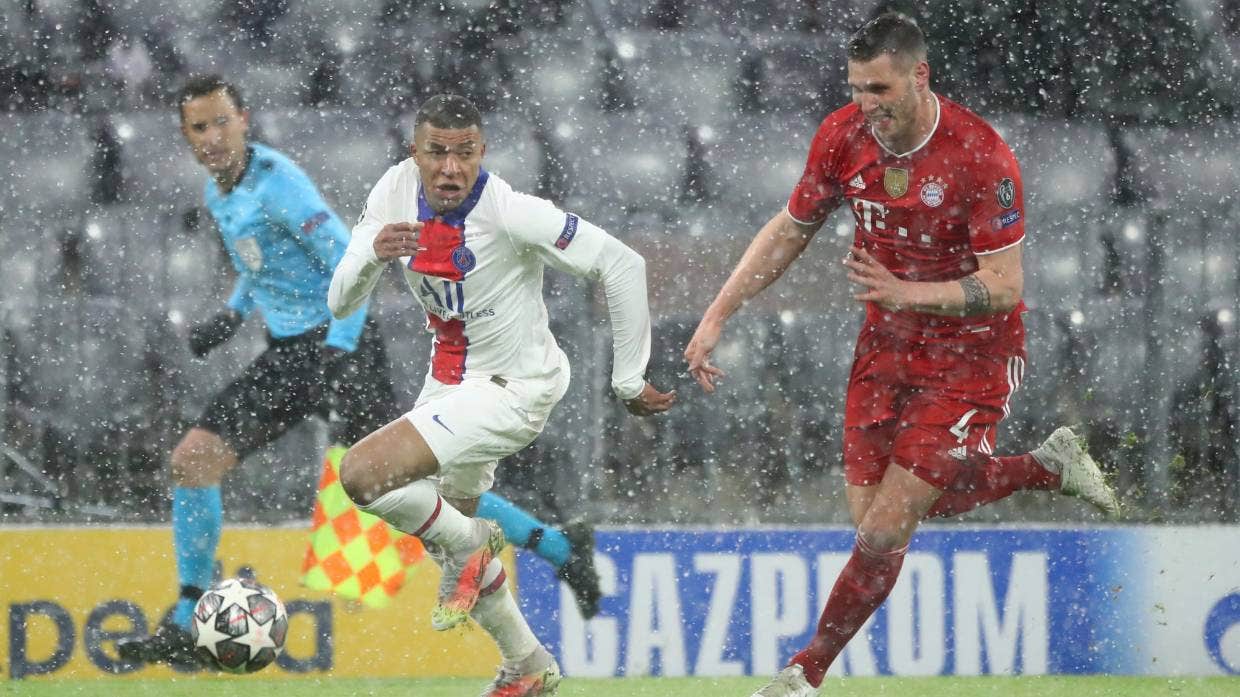 Kylian Mbappé scored twice to lead Paris Saint-Germain to a 3-2 win at defending champion Bayern Munich in the first leg of their Champions League quarterfinal.

Mbappé was a constant threat while Neymar had two assists as the French champion responded to its 1-0 loss to Bayern in last year’s final by seizing the advantage going into the second leg in Paris next week.

Marquinhos scored the other goal as the visitors went 2-0 up inside the first half hour, but the PSG captain went off injured shortly afterward and Bayern responded through headers from Eric Maxim Choupo-Moting and Thomas Müller.

Mbappé sealed the win with his eight goal of the competition in the 68th.

Choupo-Moting started up front for Bayern, which was without top scorer Robert Lewandowski due to a knee injury and Serge Gnabry because of a positive Covid-19 test.

The visitors also had absences due to Covid-19, with Marco Verratti and Alessandro Florenzi both infected. Coach Mauricio Pochettino was also without forward Mauro Icardi and the suspended Leandro Paredes, as well as Layvin Kurzawa and former Bayern player Juan Bernat.

Bayern made a good start amid heavy snowfall with Choupo-Moting hitting the crossbar with a header from a corner in the second minute.

Mbappé scored the next minute, set up by Neymar on a quick counterattack, when his shot from the right squirmed between Bayern goalkeeper Manuel Neuer’s legs.

The visitors had the ball in the net again in the 12th, but Julian Draxler’s goal was ruled out through VAR as Mbappé was just offside in the buildup.

Bayern responded with sustained pressure. Keylor Navas was alert to deny Leon Goretzka in the 19th, then Benjamin Pavard a minute later.

Choupo-Moting went close from another corner before Marquinhos scored with the visitors’ second legitimate effort on goal. Neymar beat Bayern’s offside trap with a brilliant ball over the top for his Brazilian compatriot to make it 2-0 in the 28th.

But Marquinhos went off with a groin injury two minutes later – a major blow for the visitors who were forced to move midfielder Danilo back to defend.

PSG paid the price for Marquinhos’ absence in the 37th, when Benjamin Pavard was left free to cross for the unmarked Choupo-Moting to head inside the left post.

Bayern had to make another change before the break with Jérôme Boateng coming on for the injured Niklas Süle.

Müller equalized with a header to Joshua Kimmich’s free kick on the hour mark, but Mbappé struck again despite facing Boateng in the 68th. The France star simply shot through the Bayern defender’s legs past the wrong-footed Neuer inside the left post.

Solid defensively and precise in attack, Chelsea took a big step towards returning to the last four of the Champions League by defeating Porto 2-0 in the first leg of the quarterfinals.

Mason Mount and Ben Chilwell scored their first Champions League goals to give Chelsea a great chance of making it to the semifinals for the first time in seven years.

Mount scored after a nice turn past a defender at the edge of the area in the 32nd minute and Chilwell added the second following a blunder by Porto’s Jesús Corona in the 85th. The goals came off the only three attempts on target by Chelsea in Seville, where the game was played because of travel restrictions related to the coronavirus pandemic.

“We knew it was going to be a tough game,” Mount said. “We know how hard they are to play against. We kept going and secured a good win, but that’s only half the tie. The job’s not done, they’re going to fight next week and we’ll have to give our all again.”

Next week’s second leg will also be played at Sevilla’s Ramón Sánchez-Pizjuán Stadium. Porto was considered the home team on Thursday (NZT).

The winner will face either Real Madrid or Liverpool. Madrid beat Liverpool 3-1 at home in their first leg on Tuesday.

After eliminating Cristiano Ronaldo’s Juventus in the round of 16, Porto entered the last eight looking to upset another top European team.

It was an even start in Seville but Porto appeared to be taking control before Chelsea opened the scoring with the team’s first attempt on goal. The 22-year-old Mount received a pass by Jorginho and swivelled away from a defender before entering the area and firing a low shot into the far corner to become Chelsea’s youngest scorer in a Champions League knockout game.

“It was about time it came,” Mount said. “I’ve been waiting patiently, it was a good pass by Jorgi and I was very happy with it. I’m always working on my finishing, it’s a part of my game I can improve on.”

Moments after Christian Pulisic hit the woodwork from inside the area, Chilwell sealed the victory by taking advantage of a mistake by Corona shortly after the Porto player had moved to the back line. He let the ball slip away and Chilwell pounced on it and went past goalkeeper Agustín Marchesín before finding the open net.

Chelsea is playing in the last eight for the second time since winning the European title in 2012. It last made it to the semifinals in 2014, losing to Atlético Madrid.