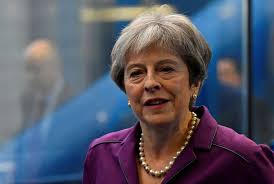 Britain's Prime Minister Theresa May arrives at the ICC for the third day of the Conservative Party Conference in Birmingham, Britain, October 2, 2018. REUTERS/Toby Melville

BIRMINGHAM, England (Reuters) – British Prime Minister Theresa May will tell her Conservative Party on Wednesday that the impending divorce from the European Union is an opportunity that opens up a future full of promise, assuring the faithful: “We have everything we need to succeed.”

n a speech on the final day of her party’s conference, May, who quietly campaigned to stay in the EU in a 2016 referendum, will take aim at critics who accuse her of failing to embrace Brexit.

With only six months before Britain leaves the EU, May is under pressure over Brexit in Brussels and at home, where some of her loudest critics, particularly former foreign minister Boris Johnson, have done little to hide their leadership ambitions.

Her efforts to take back the initiative on Brexit and her party’s domestic policy at the conference in the English city of Birmingham have fallen flat, with eurosceptics stealing the limelight with their bid to force her to drop her so-called Chequers plan for Brexit.

Her speech on Wednesday is the last chance at the conference for her to reset her agenda.

“I passionately believe that our best days lie ahead of us and that our future is full of promise,” she will say according to excerpts of her speech.

“Don’t let anyone tell you we don’t have what it takes: we have everything we need to succeed.”

Describing Brexit as a “moment of opportunity”, she will promise to always act in the “national interest”, a swipe at Johnson, whose alternative proposals for leaving the EU, she says, would tear the United Kingdom apart.

With no agreement with the bloc over the divorce or a future relationship, the last day of the conference marks the beginning of what some officials predict will be a frenzied couple of weeks of diplomacy between London and Brussels as the two sides try to secure a deal to end more than 40 years of partnership.

May and her team face weeks of difficult conversations with Brussels to win a deal, but she also faces challenges from inside her own party not just over Brexit but also over what some members call a lack of direction on domestic policy.

Her speech will try to address what many in the governing Conservatives see as a growing threat from the main opposition Labour Party, which staged an upbeat conference last week when its leaders voiced confidence of winning any new election.

Taking aim at Labour’s leader, Jeremy Corbyn, she will say that millions of people are “appalled” by his leftist policies, which include renationalising rail, mail and utilities and boosting spending on infrastructure and housing.

“They want to support a party that is decent, moderate and patriotic. One that puts the national interest first,” she will say. “We must show everyone in this country that we are that party.”

And playing with Labour’s refrain of being the party “for the many, not the few”, she will add that the Conservatives should be: “A party not for the few, not even for the many, but for everyone who is willing to work hard and do their best.”