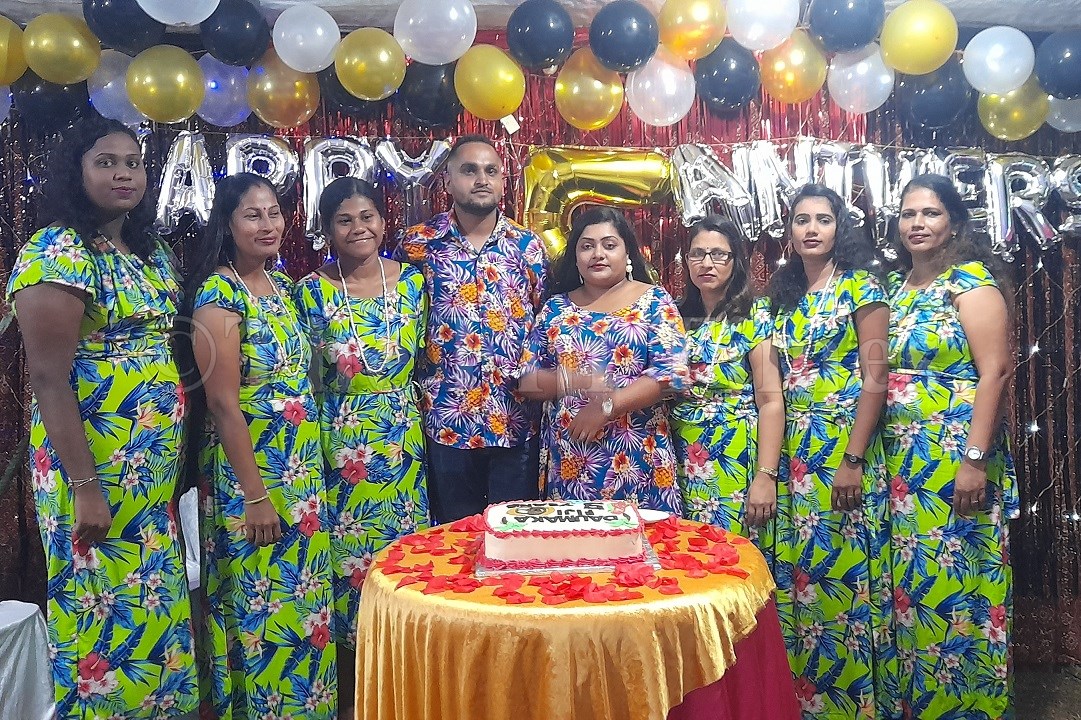 Sonal Prasad with his wife and staff members of Daumaka at the fi ve-year anniversary celebration in Labasa. Picture: SERAFINA SILAITOGA

Despite the impact of COVID-19 and spending two months in prison, Sonal Prasad pursued and achieved his business dreams.

The director of Daumaka, a Labasa-based drapery shop, organised a party for his staff to thank them for standing together during the tough times.

“It wasn’t easy for me and my wife because we just got married in 2018, a year after I started the business and then I got into an accident and this year, I spent two months in prison for that accident,” he said.

“But before going through this, I had to handle the impacts of COVID-19 and I am blessed because my wife, who is a school teacher, used all her pay during those difficult two years to sustain us.

“So when I walked into prison, she held on to the business and after school she would go to the shop to see the staff — she didn’t give up on us. That was also my source of strength, it kept me going.”

While behind bars, he drew a calendar on the cover of his Bible and would cross off the dates in February and March, counting down his term in prison.

“I did this to convince myself that I am returning home soon and that it wasn’t the end of world and everything would continue like it has today.”

The Labasa man walked out of Vaturekuka Corrections Centre and turned a new leaf. He said he had witnessed his business boom since then.

“The COVID recovery period is good and I have recovered very well as a lot of things in the shop are being sold and customers are returning in numbers.

“During the COVID period, there were no functions allowed and movement of people was also restricted so we suffered because our business sells items used for functions whether it be traditional or modern day events.

“But even when we didn’t make money during the COVID period, I didn’t let go of any staff or reduce their working hours or pay, instead I continued to value them because workers are our greatest assets.”

Mr Prasad said the situation allowed him to become creative so he turned to jewellery, perfumes, watches and other accessories.

“These items started pulling back customers and I also made use of the malls where my staff would sell items and we made good sales from that too.”

Before starting his business, Mr Prasad worked at Jack’s Handicrafts holding branch manager posts, MHCC supermarket in Suva and Ashabhaiand Co Pte Ltd as a driver. “It’s my humble beginning from these jobs that made me become a strong person and what I have gone through in life.

“I believe anyone can start a business, but the secret to staying in business is perseverance and sacrifice.

“Five years ago I started my own business naming it ‘Daumaka’, to suit the iTaukei needs for traditional events and because I have a lot of iTaukei customers too.

“I am glad I never gave up and continued to pursue my business plans even when I was in jail and even more blessed that my wife stood by me.”

At the five-year anniversary, Mr Prasad awarded his seven staff members with a certificate of appreciation and he also plans to fund part-time studies for his shop manager.

“This is the way to go because it’s our staff who make our business prosper.”