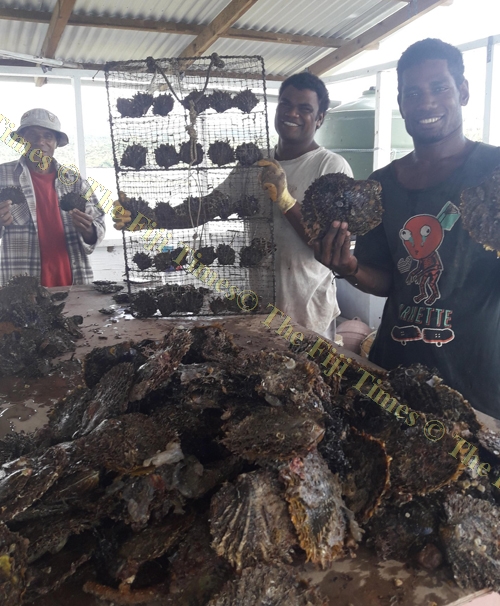 Staff members of Civa Fiji Pearls with the oysters they harvested. Picture: SUPPLIED

CIVA Fiji Pearls was founded in 2008, started producing pearls in 2010 and exports its pearl all over the world, but mostly the US and Japan.

Company director Claude Michel Prevost said parallel to their pearl production, they were partner in the Giant Clam Hatchery project (for export and local market) and were partners also in two community development projects, namely the Nasomo Ra Marama Shell Training Center in Somosomo and the Half Pearl Mabe project in Dreketi (Qamea).

Mr Prevost said both of these community development projects were done in partnership with Australian Center for International Agriculture Research (ACIAR).

Similar to the agriculture sector, pearl farmers too were affected by Tropical Cyclone Winston and Mr Prevost said it had been challenging for them as well. “We had three bulk exports to international market, the last one being in 2016.

If all goes well, the next bulk export of pearls will be in 2020.

“The four-year lag in exports is simply due to TC Winston. It takes roughly three and a half years to produce a pearl and TC Winston has seriously disrupted our production. We are happy to say now that in the end of November, our production numbers will be back to pre-Winston numbers.

“By April next year, we will be back on our growth path. A lot of dollars and long hours had to be reinvested in the farm to put our production levels back in order.”

Mr Prevost said a lot of people and organisations came to the rescue and they were grateful for it.

“We have to thank our dedicated staff who have put long hours in harsh times to rebuild our farm, we have to thank also the Ministry of Fisheries who have jumped in the water with us with their community based spat collecting program so we could increase production numbers of pearl oysters.

“We have to thank also the Australian Government who, through their ACIAR organisation, have provided planting materials to all pearl farmers in Fiji. “The European Union also through the Pacific Community (SPC) did also provide farming material so we could increase production levels back to pre-Winston numbers,” he said.

Mr Prevost said the company also invested in a land-based Giant Clam Hatchery three years ago in a partnership.

“We already have more than 50,000 juveniles in production and we are continuously starting new batches so we can have a constant supply of clams in the next few years.”

The community projects that Civa Pearls have partnered with ACIAR has benefited women from Dreketi and Somosomo.

“Our first project is a Half Pearl (Mabe) project in Dreketi (Qamea Island) with a women group (Soqosoqo ni Marama ni Dreketi).

“Here we train this group in producing their own half pearls from pearl oyster for the jewellery production for the local market. The other partner in this project is ACIAR (Australian Center for International Agricultural research).”

He said the Shell Carving Training Center in Taveuni in Somosomo (Nasomo Ra Marama Shell Training Center) was also funded by ACIAR and provided continuous training in shell carving for the Mother of Pearl Jewellery market.