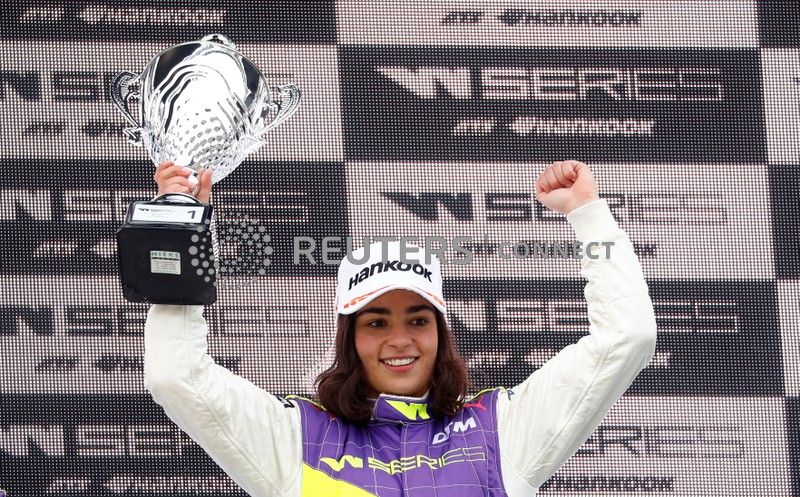 HOCKENHEIM, Germany (Reuters) – Britain’s Jamie Chadwick stood on top of the podium as the first race winner in the new all-female W Series on Saturday with compatriot Alice Powell second at a damp and overcast Hockenheim.

The victory completed a dominant two days for the 20-year-old, one of five Britons in a field of 18 in identical Formula Three cars, after setting the pace in Friday practice and starting on pole position.

“I see it as a huge, huge moment. As a driver it makes no difference but as a person, and as a female in motorsport, I think it’s incredible,” said Chadwick.

She was presented with her trophy by South African Desiré Wilson, who in 1980 made history of her own by beating a field of men to win a non-championship British Formula One race at Brands Hatch.

She ran wide at the hairpin exit, a lapse that allowed compatriot Sarah Moore to take the lead.

“I went down into turn six, went to brake what I thought was quite early and nearly ended up in Berlin or somewhere,” she joked.

A collision between Finland’s Emma Kimilainen, who had stalled at the start, and Canadian Megan Gilkes then brought out the safety car with Chadwick retaking the lead at the re-start.

“I don’t want to sound disappointed, but I am a bit with how that race went,” she said. “I felt I didn’t quite manage it as well as I should have done.”

Powell, who started in sixth place, was taking part in her first single seater race since 2014, with her career stalling due to a lack of funding. None of the drivers in W Series have to pay to compete.

She finished 1.3 seconds behind her compatriot with 18-year-old Garcia a mere 0.3 further back.

“If it wasn’t for W Series I wouldn’t be sat here or back in a race car,” said Powell. “It’s come under a lot of criticism from people who really didn’t understand this concept, and that was about opportunity.”

Former F1 racer David Coulthard, who is chairman of the W Series advisory board as well as commentating on the race, felt the debut had gone well.

“I’m happy with that,” he said. “I’m just really excited to see it come to fruition… this is going to be a close battle as we go to different circuits with more experience.”