Cessna 172 report: Unlikely pilots were under the influence of alcohol 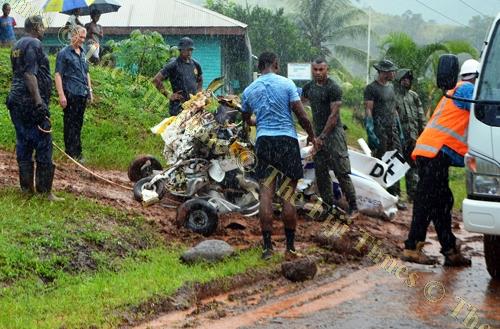 Members of the rescue teams prepare to load part of the Cessna 172 wreckage on to a truck. Picture: LUKE RAWALAI/FILE

A TOXICOLOGIST from New Zealand National Poisons Centre found samples of what is believed to be alcohol in the body of the pilot in command on board the Cessna 172R when it crashed in the mountain ranges of Delaikoro in Vanua Levu last year.

This was part of the report compiled by New Zealand aircraft crash investigator Andrew McGregor who headed the investigations.

The aircraft accident report was released by the Attorney-General, Aiyaz Sayed-Khaiyum, in Suva last week.

According to the medical pathological information, the Fiji Police Forensic Chemistry Laboratory had analysed the bodies of the deceased occupants on board the aircraft.

“The results of the chemical analysis were interpreted by a toxicologist who is employed by the New Zealand National Poisons Centre,” the report stated.

“This interpretation concluded that although alcohol (ethanol) was found in both samples, with a relatively high concentration in the sample from the pilot in command, this chemical was most likely to have formed during the extended period which elapsed between the accident and the time the samples were taken.

“For this reason, it is unlikely that the pilots were under the influence of alcohol at the time of the accident,” the report said.

With respect to possible influences of drugs such as kava or marijuana, the report further stated although the chemical analysis undertaken by the Fiji Police Forensic Chemistry Laboratory, it did not specifically test for these substances.

“There was no evidence, either from witness accounts or from the circumstances leading up to the accident, to indicate that the pilots were under the influence of these drugs.”

However, a search on the pilot in command’s records identified no chronic or mental health conditions including regular use of medications.