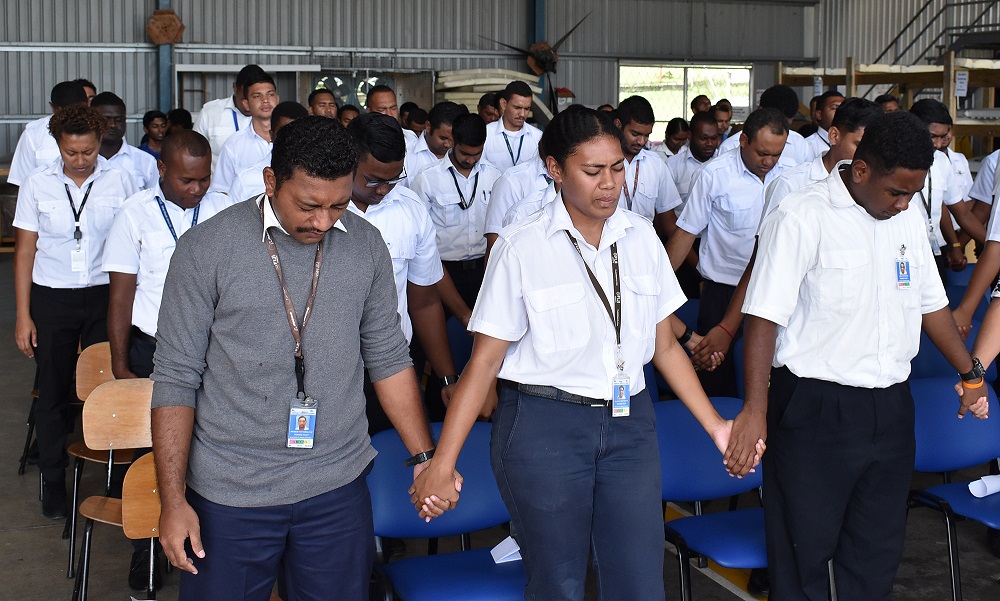 Pacific Flying School students hold a memorial service in memory of Iliesa Tawalo and Merelesita Lutu in Nadi. A plaque in memory of the pair was also unveiled following the service. Picture: BALJEET SINGH/FILE

TCAS is an instrument that advises pilots the movement of other traffic.

The accident aircraft did not have this instrument nor would it be usual for it to be required on PFS Cessna 172 aircraft.

This, according to a Department of Civil Aviation report released last week on the accident of flight DQ-FTR in February last year which resulted in the deaths of flight instructor Iliesa Tawalo and student pilot Merelesita Lutu.

Details in the report, based on information derived from communications with air traffic control and commercial flights operating in the area at the time, said about 10 seconds before the decision was made by Mr Tawalo and Ms Lutu to turn back to Labasa because of inclement weather, the accident aircraft began to descend below 6000 feet.

At 11.55am, the Labasa Flight Information Officer contacted a Fiji Link aircraft and informed the pilot that DQ-FTR was planning to return to Labasa and was expected to land at 12.15pm.

At 11.56am, the Fiji Link pilots advised Labasa that their aircraft would land at 12.07pm. DQ-FTR said their altitude at that time was 3200ft.

The Labasa air traffic controller told DQ-FTR of the Fiji Link flight arrival time and also told Mr Tawalo and Ms Lutu that visibility at Labasa had reduced to 5000 metres.

At 11.57am, Mr Tawalo briefly acknowledged receipt of the information.

This was the last communication from the accident aircraft.

At that time, the ground speed of the aircraft had increased to 130 knots –—more than 240kmph — and the aircraft was below 3000 feet and descending.

The likely time of impact according to the ADS-B (Automatic Dependent Surveillance-Broadcast) information was 28 seconds past midday.

According to the report this was consistent with two Doguru villagers who were tending to their crops in an area near the crash site.

Both said they could not see a communications tower at Delaikoro because of heavy rain and mist and both heard the sound of the aircraft’s engine noise change before a loud bang around midday.