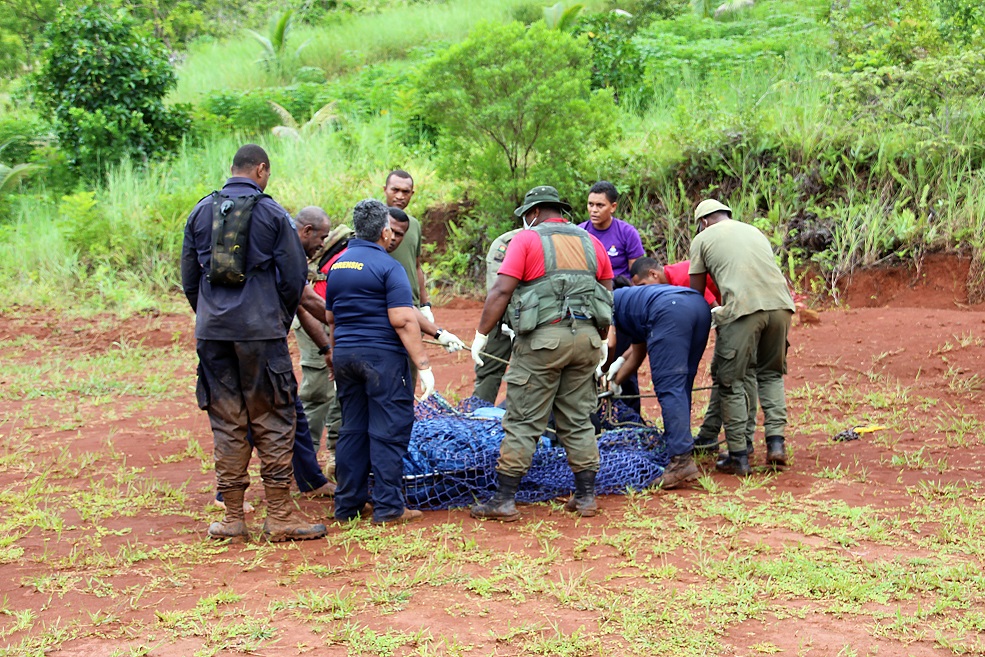 Police prepare the bodies of the aviators for the hospital morg. Picture LUKE RAWALAI

WHILE the world admired the heroic act of fire officers who recovered the bodies of the two pilots from the wrecked Cessna 172, courageous tales of villagers who played a vital role were not fully divulged.

This is because these villagers of Dogoru preferred to keep a low profile as they attended to the search during the Lanten season.

For them, the brave act on this particular week was done out of love, signifying the love of Jesus Christ during the Lanten period.

As we remember the fallen aviators, the villagers finally shared their stories.

Three villagers led search teams through flooded rivers, steep climbs, hung on to tree trunks with one hand to assist officers to higher ground (with the other hand) and they led the parties to the site.

They also assisted the fire officers in recovering the bodies as they worked from the bottom of the wrecked plane.

These villagers also decided which trees to hang on to for support while assisting the officers to the site.

Two trees — Bua ni Viti and Lato – were common trees that were used during the search as villagers assisted the members of the search parties move around the forest.

Isireli Rokomino led a team and while he, at times, felt sorry for the officers — military and police — for working in tough terrain, he admired their strength and effort to find the missing aviators.

Mr Rokomino said it was not easy, but their knowledge of the forest area helped a lot. It was the “boys of Dogoru”, he said, who assisted in the recovery of the bodies.

“But we didn’t mind because we treated Iliesa and Merelesita as our own, our brother and our sister.”

When their work got difficult, they said they spoke to the two aviators and asked them to lighten their work load.

Mr Rokomino said they had to do this and they found their work much easier to achieve at the crash site while retrieving the bodies.

“And it worked,” he claimed. Mr Rokomino said the rainy weather flooded rivers in the area of the search so they had to look for spots to get all the officers across.

“That’s the good thing in involving villagers because we knew that area and knew where to cross during floods and which trees to hang on to. “You just can’t hang on to any kind of trees otherwise you can break the branches and get injured.

“So I led my team across the flooded river and I advised them to call out the name of the person behind them.

“This is to make sure we were all in the line and we did this. I crossed first then I called out the next person’s name and they all did the same.”

While addressing Parliament in July last year on the increase of allocation for aircraft accident investigations in the 2018/2019 National Budget, Attorney-General and Economy Minister Aiyaz Sayed-Khaiyum said investigation into the crash of the ill-fated Cessna 172 plane was ongoing.

“So, we do need some money to fund the completion of that investigation,” he said.