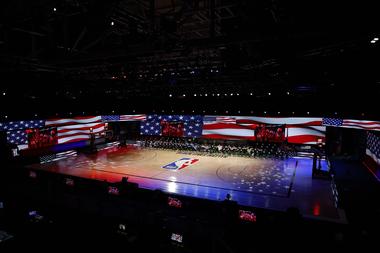 Tatum and Walker combined to shoot 17-of-23 from the floor as the Celtics (48-23) won their fourth straight game. Walker’s 19 points were the most he’s had in six games since the season restart. Gordon Hayward also scored 19.

Ja Morant had 26 points and 13 assists, and Jonas Valanciunas (14 points, 10 rebounds) also had a double-double for the Grizzlies (33-39), who lost their secured grip on the eighth seed in the Western Conference with their sixth defeat in seven seeding games.

With the setback, Memphis dropped to a three-way tie for eighth in the West along with the Portland Trail Blazers and Phoenix Suns with one game remaining, while the San Antonio Spurs are just one percentage point behind in a virtual tie with the trio.

The eighth and ninth teams in the conference will face each other in a guaranteed play-in series this weekend to determine who clinches the No. 8 seed.

The Grizzlies cut a 16-point deficit at halftime down to eight 61-53 on a three-point play from Gorgui Dieng with 7:43 left in the third quarter. The Celtics responded with a 10-3 run to regain control and maintained a double-digit lead at 83-73 heading into the fourth.

Memphis was back within 88-78 with just over 10 minutes remaining before Grant Williams and Brad Wanamaker nailed threes for a 94-80 Boston edge. The Grizzlies failed to get back within single digits the rest of the way, trailing by as much as 20 down the stretch.

Leading 24-17 after one, the Celtics blew the game open with an 11-0 run to begin the second quarter. Boston’s lead surpassed 20 at 42-21 on two free throws from Wanamaker with 6:58 remaining in the half.