Cavs rally from 22 down, drop Heat in OT 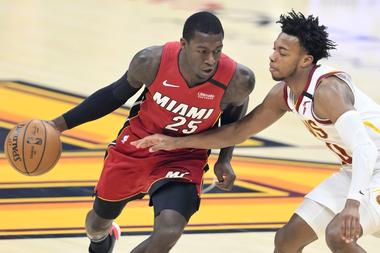 Rookie Kevin Porter Jr. scored a career-high 30 points to help the Cleveland Cavaliers overcome a 22-point, second-half deficit and rally past the visiting Miami Heat 125-119 in overtime on Monday night.

The Cavaliers, who are just 8-22 at home this season and had the worst record in the Eastern Conference entering the night, had lost eight straight games to the Heat, including 124-105 on Saturday in Miami. All but one of the eight losses came by double digits.

Cleveland’s late-game heroics were led by Larry Nance Jr., who had 16 points, including 14 after the third quarter. Cavaliers power forward Kevin Love, who had missed two of the past three games due to a foot injury, returned and provided 17 points and 14 rebounds.

Miami is one of the best teams in the NBA at home with a 23-3 record but just 13-18 on the road. The Heat have lost six of their past seven road games, including three in a row.

Cavaliers guard Dante Exum left the game in the second quarter due to a left leg injury and did not return.

Miami led for all of the first three quarters. But Cleveland put together a 21-2 fourth-quarter, tying the score 104-104 on Porter’s 3-pointer at the end of the shot clock with 4:55 left in regulation. Another Porter 3-pointer — this one with 4:10 left in the fourth — gave Cleveland its first lead of the game at 107-104.

Nunn’s put-back with six seconds left tied the score 111-111, and the game went to overtime after Porter’s baseline shot at the buzzer bounced off the front rim.