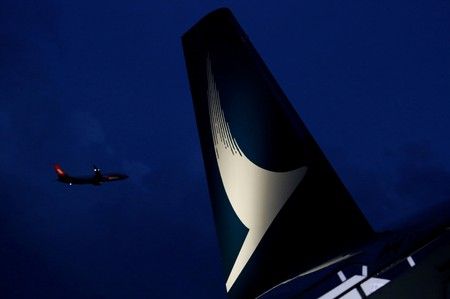 FILE PHOTO: A plane flies behind a new Cathay Pacific Airways Airbus A350 after being received by the airline at Hong Kong Airport, China May 30, 2016. REUTERS/Bobby Yip/File Photo

HONG KONG (Reuters) – Shares of Cathay Pacific Airways (0293.HK) rose more than 2 percent early on Monday after CEO Rupert Hogg resigned in a shock move, as the carrier grapples with the involvement of some of its employees in the city’s anti-government protests.

Cathay’s shares rose as much as 2.3 percent to HK$10.84, their highest in two weeks. The carrier has emerged as the highest-profile corporate target as Beijing looks to quell protests in the territory that have gone on for 11 straight weeks.