Catalonia: the crisis at the heart of Spain’s election 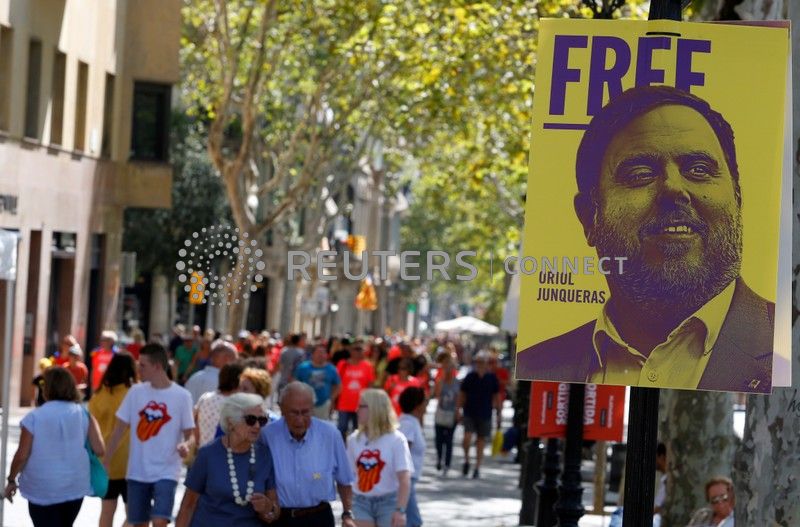 TOLEDO/BARCELONA, Spain (Reuters) – Proudly displaying two Spanish flags he brought to wave at a Vox rally, retired police officer Jose Antonio Corrales Sierra says he will vote for the far-right party in Sunday’s election and is ditching the mainstream PP conservatives because of Catalonia.

The northeastern region’s independence drive has been an agent of radical change. It was instrumental in triggering the election, has been a pivotal issue throughout campaigning and is expected to be crucial in determining the composition of the next government.

“I used to vote PP, but I will never do it again because they are traitors,” said 61-year-old Corrales Sierra, blaming the party, in office in 2017 when Catalonia defied national authorities to hold an independence referendum, for not doing enough to prevent that banned vote.

The pensioner’s words struck as irrevocable a tone as his actions, but reflected the unbridled emotions in play in the wider debate over national identity that has polarised the country like no other and whose consequences the right wing parties may have misjudged.

“Traitor” is, after all, what PP leader Pablo Casado labelled Socialist Prime Minister Pedro Sanchez, simply for his willingness to enter discussions with Catalonia’s separatists. Sanchez has consistently opposed any move towards independence.

Vox chief Santiago Abascal called him “insane” and told the rally in Toledo attended by Corrales Sierra that Spain’s survival as a nation was at stake.

Things are much calmer on the ground in Catalonia than in October 2017 when the crisis upended Spanish politics, helping Vox rise from near-anonymity to the certainty of becoming the first far-right party to sit in parliament in almost 40 years.

But for it and the other right-wing parties, pushing the Catalonia issue so hard throughout campaigning for an election that remains too close to call may prove counterproductive.

Banking early on the attention it could win them, Vox became co-accuser in the ongoing Supreme Court trial of twelve Catalan separatist leaders for rebellion and sedition.

PP and Ciudadanos joined the anti-secession bandwagon too.

But by all choosing Catalonia and attacks on Sanchez as a major campaign theme, when polls show it is not the top concern for voters, the three right-wing parties risk losing time and energy battling each other and damaging their chances of entering government.

What they are targeting is forming a coalition together, but that outcome, which opinion polls showed to be the most likely one a few weeks ago, has become much more of an outside bet.

Sanchez’s Socialists are now in pole position and, for Lluis Orriols, a political science lecturer at the University Carlos III of Madrid, much of that is down to the right’s stance on Catalonia.

“The three parties saw opportunities on their right flank … but they have neglected the centre, which the Socialists are now occupying by default,” Orriols said.

The election is however far from in the bag for Sanchez, and there again Catalonia is likely to be a determining factor.

Sanchez hopes to be able to govern with just anti-austerity Podemos, the only national party that supports the principle of a referendum on Catalonia’s future.

But surveys suggest other allies will be needed and Catalonia’s separatists are an option.

They precipitated the end of his minority government in February, refusing to back his 2019 budget bill because they felt he was not supportive enough of their demand to hold another referendum.

But in the past week the two main Catalan secessionist parties, ERC and JxCat, have softened their stance, showing some willingness to help support a second term for Sanchez and stave off a right-wing government that would include hardline nationalists Vox.

“We will not facilitate, either by action or by omission, an extreme right government in Spain,” ERC leader Oriol Junqueras said from the Madrid jail where he is being held during his sedition trial.

“If we want the (Catalan) republic, the referendum, it is obvious that we have to be understood in the world.”

Catalonia elects 48 of Spain’s 350 deputies, and ERC and JxCat could together have up to 23 seats, a CIS opinion poll showed.

With the margins so fine, that suggests Junqueras’ support could be decisive, though any talks between Sanchez and the secessionists are bound to be long and complex.

Based on opinion polls, the Socialists and Ciudadanos could together form a two-party coalition.

But chances of that appear to have receded as the election has drawn closer. Not only do they differ strongly on Catalonia but after Rivera repeatedly rejected any such alliance, Sanchez said on Tuesday it was not part of his plans either.

Meanwhile, in Ciutat Meridiana, the poorest neighborhood of Barcelona, the debate about independence seems far from people’s minds.

“What I care about is having a job. I am apolitical,” said 41 year-old construction worker Francisco Javier. He said the campaign should focus on bigger concerns such as global warming and plans to leave his ballot paper blank.