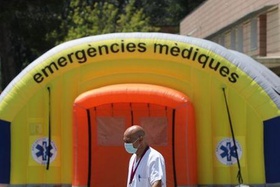 FILE PHOTO: A health worker wearing a protective mask walks past a field hospital outside Arnau de Vilanova hospital, after a judge barred Catalan authorities from enforcing a stricter lockdown to residents in the city of Lleida, to control the coronavirus disease (COVID-19) outbreak, in Lleida, Spain, July 13, 2020. REUTERS/Nacho Doce

BARCELONA (Reuters) – Spain’s populous Catalonia region made a fresh attempt on Tuesday to put an area of 160,000 people under lockdown to stem the latest local coronavirus surge in one of Europe’s worst-affected nations, which had thought the crisis was ending.

Authorities also recommended that people stay at home in a suburb of Barcelona, capital of the northeastern region of 7.5 million people where there has been an acrimonious push for independence in recent years.

Having suffered more than 28,400 deaths, tourism-dependent Spain brought the epidemic largely under control through a tough national lockdown that was lifted on June 21.

However, since then, more than 170 local outbreaks have been detected, with 120 still active – including a worrying one around the Catalan city of Lleida.

The order for residents of Lleida, and seven nearby towns, to stay at home still needs to be approved by a judge amid tensions over how to handle local outbreaks.

Catalan government spokeswoman Meritxell Budo said the pro-independence regional government was confident its decree would be rubber-stamped in court, after a previous lockdown order for Lleida meant to start on Monday was struck down.

Under the new rules for Lleida, people would only be able to leave homes over the next 15 days for activities like working or buying groceries. Gatherings of more than 10 people will be banned, while hotels, restaurants and bars will close except for food pick-up or delivery.

“We are asking citizens to be responsible to each other and to not leave (homes) if it is not strictly necessary,” Budo said.

The Catalan government also recommended that people in three neighbourhoods in L’Hospitalet de Llobregat, a 265,000-people Barcelona suburb, stay home for the next 15 days.

“We recommend to not do anything that can be avoided, to reduce socialisation levels,” Catalonia’s health top official Alba Verges told a news conference.

In the past seven days Catalonia has detected 2,327 new cases of the virus, compared with 500 in neighbouring Aragon, which has the second highest number.