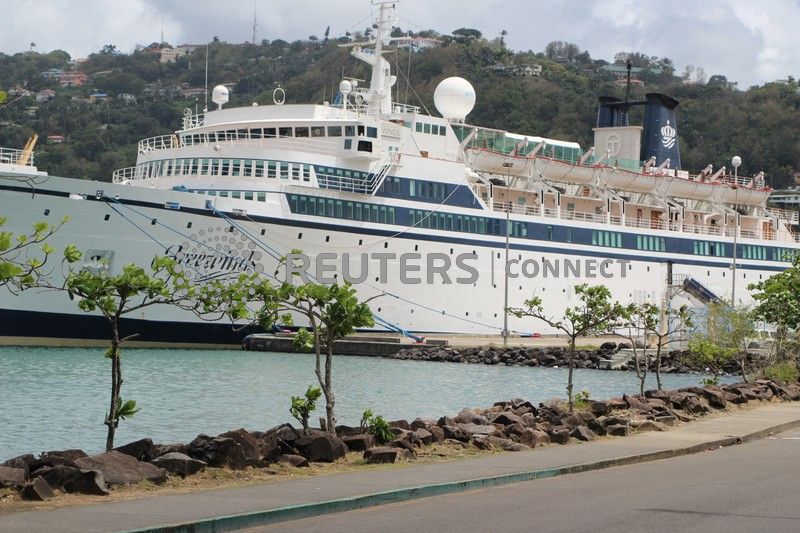 A 440-foot ship owned and operated by the Church of Scientology, SMV Freewinds, is docked under quarantine from a measles outbreak in port near Castries, St. Lucia, May 2, 2019. REUTERS/Micah George

(Reuters) – The Caribbean nation of St. Lucia has imposed a quarantine on a visiting cruise ship, barring any passengers or crew from leaving the boat while in port, after a case of measles was diagnosed on board, the island’s chief medical officer said.

Dr. Merlene Frederick-James said in a video statement posted to YouTube on Tuesday that the St. Lucia Ministry of Health ordered the restriction after conferring with the Pan American Health Organization and others about the risk of exposure to islanders.

The ministry learned of the confirmed measles case from “two reputable sources,” and in light of current measles outbreaks in the United States and the highly infectious nature of the disease “we thought it prudent that we quarantine the ship,” Frederick-James said.

She gave no information about the ship or its origins.

NBC News, citing a St. Lucia Coast Guard sergeant, reported the boat in question is named Freewinds, which is the name of a 440-foot vessel owned and operated by the Church of Scientology.

The international vessel-monitoring website MarineTraffic.com also showed that a Panamanian-flagged passenger ship identified as SMV Freewinds docked in port near the St. Lucia capital of Castries. The website indicated the ship was headed next to the island of Dominica.

The Church of Scientology website describes the Freewinds as a floating “religious retreat ministering the most advanced level of spiritual counseling in the Scientology religion.” It says its home port is Curacao.

Church officials did not immediately respond to efforts by Reuters seeking comment on the situation.

NBC News reported that nearly 300 passengers and crew were aboard the vessel, with one female crew member diagnosed with measles.

The cruise ship quarantine comes as the number of measles cases in the United States has reached a 25-year peak with more than 700 people diagnosed as of this week, part of an international resurgence in the disease.

Public health officials blame declining vaccination rates in some communities driven by misinformation about inoculation that has left those populations vulnerable to rapid spread of infection among those with no immunity to the virus.

Health authorities in Los Angeles last month ordered quarantines on two university campuses after each one had reported at least one confirmed case.

The vast majority of U.S. cases have occurred in children who have not received the three-way vaccines against measles, mumps and rubella (MMR), which confers immunity to the disease, officials said.

Measles is spread through casual contact with the virus, which can remain infectious in the air of an enclosed space for up to two hours after it is breathed out by someone carrying the disease.