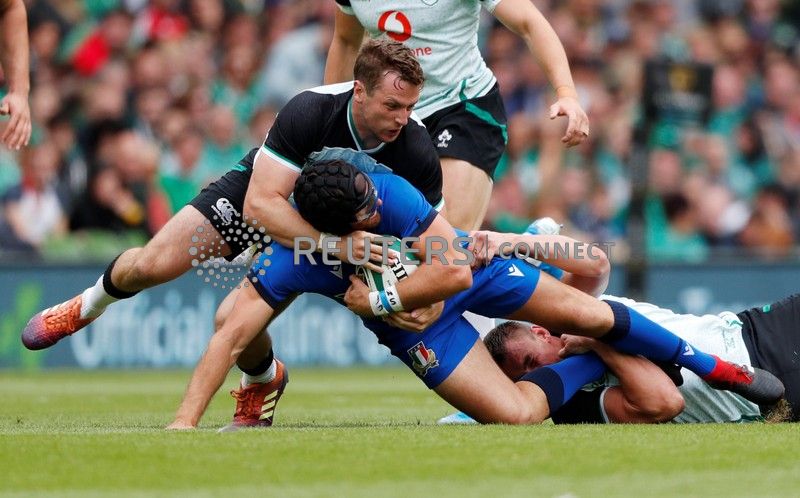 The flyhalf was the stand-out performer of an experimental home line-up before leaving the field in tears.

The injury to Johnny Sexton’s undisputed understudy gave Joe Schmidt a fright six weeks before the tournament begins although the Ireland coach said after the game that while Carbery’s ankle was swollen, x-rays showed it was not fractured.

“It’s too soon to say but I don’t think it’s going to keep him out of the World Cup,” the New Zealander told Irish national broadcaster RTE/

The Munster number 10 was unable to put any weight on his left leg after being trapped in a ruck.

Before his departure, Carbery had kicked near flawlessly, including some dangerous grubbers, scored one try and had a hand in the two other first-half scores completed by wingers Andrew Conway and Dave Kearney.

Carbery was replaced by Connacht’s Jack Carty, yet to start an international after making his debut in February. Leinster’s Ross Byrne, who would be next in line and failed to make the training squad, has two caps to his name.

While the scrappy encounter petered out with Carbery’s exit as Kieran Marmion and Jordi Murphy completed the try scoring, others who impressed in a mostly second-string Irish side included man of the match Conway and Kearney, only one of whom is likely to make the cut.

Chris Farrell also looked sharp at centre, another position of depth for the Irish, while others battling for spots in the final squad, such as debutant Jean Kleyn, were fairly anonymous.

Ireland face hosts Japan and Scotland in World Cup Pool A, having been considered one of the favourites for the title before a disappointing defence of their Six Nations title this year.

But they also left with injury concerns after centre Marco Zanon was ruled out in the match warm-up.