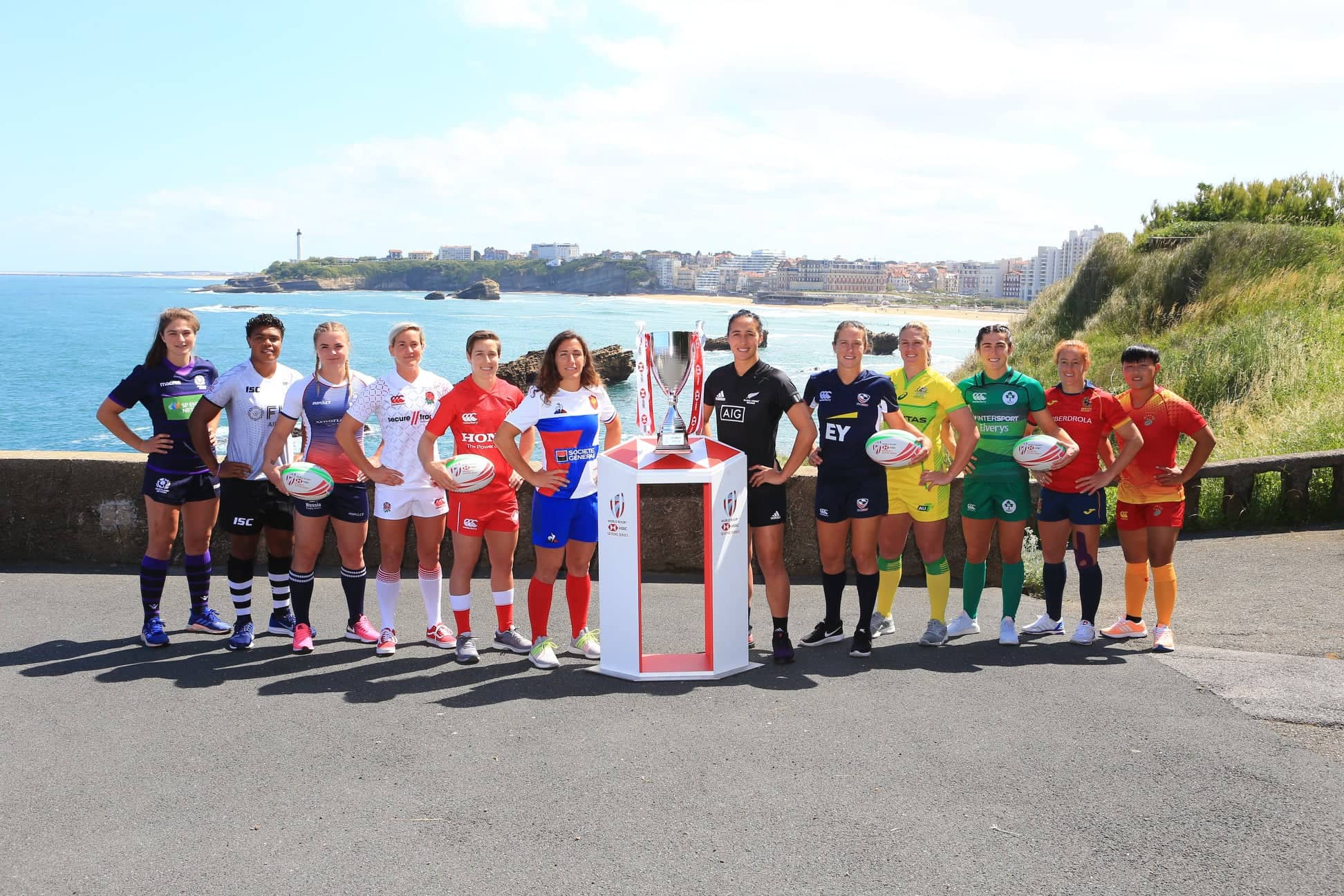 The 12 captains came together ahead of the HSBC France Women's Sevens for the sixth and final round of the HSBC World Rugby Women’s Sevens Series 2019 this weekend. Picture: WORLD RUGBY

The teams are preparing for their final tournament of the HSBC World Rugby Women’s Sevens Series 2019 where one side will be named series champions at the Stade Aguiléra on Sunday.

As the principal route to qualification for the Tokyo 2020 Olympics, the top four teams on this year’s HSBC World Rugby Women’s Sevens Series will earn their spots. New Zealand were first to qualify in Langford last month and will be joined by USA, who simply have to take to the field of play on Saturday to confirm their place, alongside two remaining teams who will fight for their place this weekend.

After a successful HSBC Canada Women’s Sevens tournament where they not only clinched the Cup win but also reserved their place in Tokyo, series leaders New Zealand will be looking to continue their form in the final round with captain Sarah Hirini commenting: “We had two goals heading into this series and they were qualifying for Tokyo and also winning that world series title and bringing it back home to New Zealand.

“We want to finish the weekend on a high so taking that tournament [title] would be an extra bonus – the girls have been preparing well to hopefully go and do that this weekend.”

New Zealand will face invitational side Scotland, Russia and England in Pool A on day one.

Scotland will participate in their first ever HSBC World Rugby Women’s Sevens Series tournament in Biarritz and will be looking to build on their performance at the world series qualifier tournament in Hong Kong earlier this year where they missed out to Brazil in earning core team status on next year’s circuit.

Captain Helen Nelson commented: “Our core squad has probably been together for the past three or four years so we’ve been building quite nicely and we’re really excited to see how this weekend goes.”

On the Hong Kong qualifier, Nelson added: “It was incredible – we went into it with not too much expectation of ourselves or of anyone else because it was our first time there and other teams had been there a few times, so we were in a really nice position.

“We’d come off the back of quite a tough Six Nations so we weren’t putting too much pressure on ourselves and beat Japan and Papua New Guinea, so it was an incredible experience for us as a team dealing with the bigger crowds and that kind of knockout rugby – ​it was a really good learning opportunity.”

Currently ranked second in the standings, USA – who won bronze in Langford – are looking forward to the prospect of Olympic qualification with captain Lauren Doyle commenting: “It is a great feeling – we have worked really hard this season and to accomplish the top four spot for the Olympic qualification is a big deal for us.

“It’s a real credit to our programme and how far we really have come and how hard we have been working.”

Fifth-placed France will be looking for the support a home crowd this weekend with Olympic qualification still on the horizon and after missing out on a bronze medal in Canada last month.

Captain Fanny Horta commented: “The qualification is necessarily in our mind and we know that it is not done yet. The pressure is still there, but I think we have to put it in a positive way and have the desire to show our identity, to have fun on the field, to go to the end of our project, of who we are. It’s always an event to play at home, so much so that it serves us in the positive.”

The action gets underway at 12pm local time on Saturday 15 June at the Stade Aguiléra with Canada versus Spain in the opening pool game.